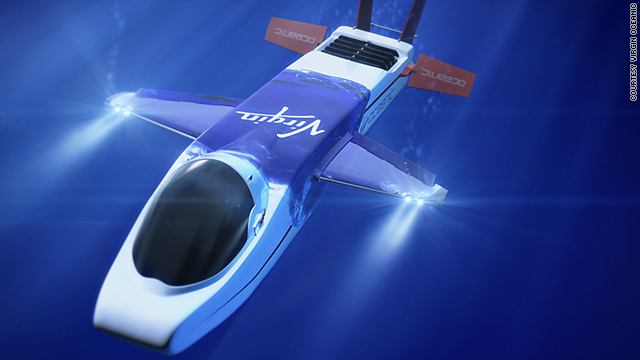 Richard Branson is planning a record-breaking voyage to the bottom of the seabed in the coming year.
STORY HIGHLIGHTS

(CNN) -- Adventure-loving billionaire Richard Branson is known for reaching for the stars, but now he's set his sights on a final frontier a little closer to home: the deepest parts of the ocean floor.

Branson announced his undersea exploration venture, Virgin Oceanic, earlier this month, and in a recent interview with CNN, he discussed the plans for his upcoming voyage to the bottom of the seabed.

"There have been about 400 people who have been into space but pretty well nobody has been down and explored the big trenches in the oceans," said the founder of the Virgin business empire.

"I am planning to go down in the Puerto Rican trench. It goes down further than Everest is high...about 28,000 feet."

The airplane-shaped Virgin Oceanic sub is built from carbon fiber and titanium, with a bubble-like quartz viewing dome made to withstand over 6 million kilograms of pressure.

According to Virgin Oceanic, the "flying" sub has overcome two big obstacles facing deep-sea explorers: extreme cold and pressures of over 1,000 atmospheres (about the same as 8,000 elephants standing on a Mini Cooper).

I am sure there will be a few flutters in the stomach.
--Richard Branson, billionaire entrepreneur
RELATED TOPICS

Picking up where Steve Fossett -- Branson's close friend and fellow adventurer who perished in a flying accident in 2007 -- left off, the sub's sophisticated design will allow it to travel to depths of 36,000 feet -- about double that of previous advanced subs, according to Branson.

"We hope we built it right," he said. "The Americans, Germans and the Chinese have tried before but they have never been able to get below 18,000 feet -- so it's been quite a technological feat."

However, the British entrepreneur is all too aware of potential perils. According to him, two things could go wrong.

"One, obviously, is the catastrophic failure of the sub," he admitted. "Hopefully we'll hear pinging sounds as the carbon fiber starts to break and at that stage you just don't go any further."

The other possibility, Branson warned, is that of getting caught up in fishing nets at the bottom and not being able to resurface.

However, the 60-year-old father of two remains philosophical: "There are risks involved in trying to push the boundaries forward. There were risks involved when man first went into space and we will do everything we can to avoid any catastrophic problems."

Although the sub is expected to smash up to 30 diving records, Branson insists that the exploration is about much more than sheer adventure.

"There's thousands of species that man doesn't know exists and we are going to come up with some extraordinary photographs of the most extraordinary creatures that mankind has never seen," he said.

Indeed, the mission behind the Virgin Oceanic expedition includes a brief to "assist science in understanding our eco-system and raise awareness of the challenges facing our oceans."

Unlike his suborbital-space-flight company, Virgin Galactic, the new expedition is not accepting paying passengers. Rather, it will comprise only five deep-sea dives, each one carrying just one person, to the deepest points in each of the five oceans.

So, is Branson nervous to be one of the solo voyagers? "I am sure there will be a few flutters in the stomach as one goes down -- it's going to take about three hours to reach the bottom of the sea," he said.

But he's no stranger to danger. Having launched Virgin Records in the 1970s and amassing a fortune in various holdings, which include an airline and rail group, Branson has used his money to fund such exploits as circumnavigating the globe in a hot air balloon as well as various sailing records.

And what does his wife think about this latest venture?

"She'd much rather I was doing it than my kids," he quipped, adding that as long as he signed a piece of paper leaving her Necker Island -- his private island hideaway in the Caribbean -- "she'd be fine."