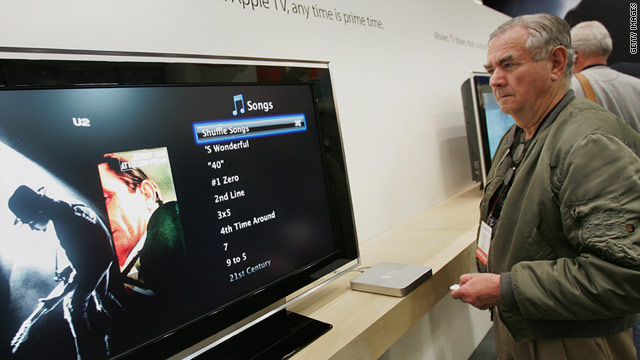 Selling its own television would give Apple a vehicle for Apple TV, a product that's foundered since its release in 2007.
STORY HIGHLIGHTS
RELATED TOPICS

(CNN) -- Apple might want to sell you your next TV.

Technology blog DailyTech on Wednesday was quoting an unnamed "former Apple executive" who said Apple plans to enter the television display market by the end of the year.

Apple plans to "blow Netflix and all those other guys away" with a console that would have Apple TV and iTunes built into it, the source reportedly told DailyTech.

The report says Apple plans to team up with an existing manufacturer to provide televisions that would be branded under the Apple name.

"You'll go into an Apple retail store and be able to walk out with a TV," said the former exec, who DailyTech said spoke under the condition of anonymity. "It's perfect."

Brian White, an analyst with Ticonderoga Securities, was bullish on the prospect of Apple entering what he described as the $100 billion LCD television market.

"In our view, the combination of Apple's powerful ecosystem, industrial design savvy, powerful brand and ability to reinvent product categories could make Apple a powerful force in the TV world in the coming years," White wrote in a report on the article.

He wrote that during a trip to China last year, Ticonderoga was "the first to uncover data points" suggesting Apple planned to release a "smart TV" by the end of the year.

Apple already makes an Apple TV device which, amid a string of recent successes such as the iPhone and iPad, has floundered by the Cupertino, California tech giant's standards.

The system, first introduced in 2007, is a box-like gadget that lets users stream Web content, such as Netflix streaming video, on their TVs. But even Apple CEO Steve Jobs was forced to acknowledge that Apple TV has "never been a huge hit."

In September, Apple slashed its price from $299 to $99, but even that hasn't made the service a household name.

A move into television would likely keep Apple neck-and-neck with one of its chief rivals: Google.

Google TV is a similar product to the current Apple TV. And Google also is widely expected to expand its service by integrating with actual televisions.

Apple did not immediately respond to a request for comment on this story.