Are biofuels the future of flight? 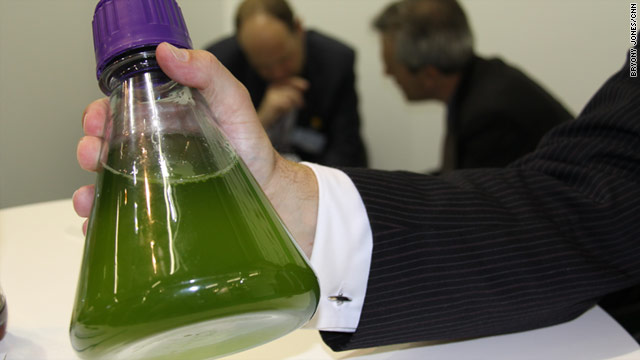 As the airline industry races to boost its green credentials, it sees biofuels including algae as a key alternative energy source
STORY HIGHLIGHTS

Paris (CNN) -- Some commercial passenger jets will begin flying on biofuels within months, as the airline industry attempts to shed its image as a major source of global pollution.

Industry insiders say other companies are sure to follow suit, with approval for the controversial fuels' use on commercial flights expected soon.

Dutch airline KLM has announced plans for more than 200 flights between Amsterdam and Paris using 50% bio-kerosene, beginning in September.

And this week the European Commission, airlines and fuel producers set a target for the production of two million tonnes of sustainably-produced biofuel for aviation by 2020.

Green campaign group Friends of the Earth has warned that meeting that target each year could require an area of land the size of Belgium to grow crops.

The U.S. uses 20 million barrels of oil a day -- three million of that on aviation
--Jason Pyle, Sapphire Energy CEO

Passengers on board said there was little difference to their journeys from those on planes using traditional jet fuel.

"The pilot told me there was no difference in the performance," Jim Rekoske, vice president of Honeywell's renewable energy business, told CNN. "Except that the engine which was flying on biofuels used about 20 gallons (75 liters) less fuel than the one using traditional jet fuel."

As demand for biofuels heats up, experts are busy working to produce the most efficient alternative energy sources for planes, and to make them cheaper to use.

"Many biofuels come from feedstocks which have been the subject of little scientific research so far -- we need learn more about them so we can increase yields, which will bring processing costs down."

There are ethical concerns, though, about using food products to make biofuels when people in some areas of the world do not have enough to eat.

"There's no food product that we have so much of. All the sugar that the U.S. and Brazil produce -- together -- would only amount to 500,000 barrels a day.

"And just think what it would do to world food markets if we used it all up for biofuels - you'd be starving the world, essentially, by trying to make jet fuel."

Pyle says that even biofuels made of inedible crops are using up valuable resources which would be better spent producing food.

"Conventional biofuels need agricultural land and potable water -- which we need for other things," he said.

A report by the Institute for European Environmental Policy found biofuels can produce up to 167% more greenhouse gas emissions than fossil fuels.

Sapphire Energy's answer is a form of "green crude oil" made from algae, which can be grown on non-agricultural land in shallow paddies full of undrinkable saline water.

KLM's solution is to use recycled cooking oil, though the airline said it would consider other sources, as long as they have a "minimum negative impact on biodiversity and food supply."

But Rekoske warned that although some airlines are ready to make the switch, others are likely to be slow to convert to biofuels.

"The adoption rate for biofuels is no different to that of any other technology: You get the 'early adopters,' then those who are cautiously optimistic, who sit back and wait and see how the early adopters get on.

"And then there are the laggers, who claim it's not going to work -- the ones who won't get an iPhone, because there'll be an iPhone 2 along any minute -- and they always take a bit longer to convince."