In case Pi Day wasn't enough, it's now 'Tau Day' on the Internet 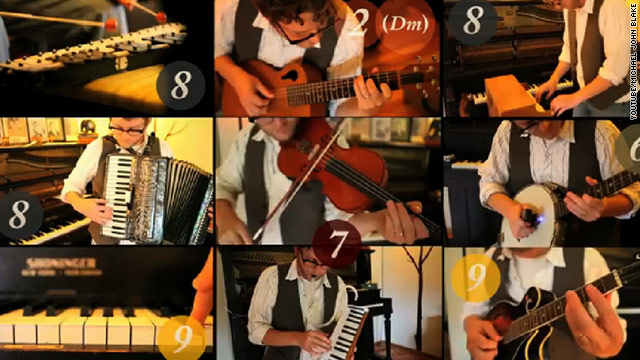 (CNN) -- On the Internet, anything can be the basis for a holiday -- even a number.

You may recall that the day honoring the number Pi -- which is March 14 (3/14 ... get it?) -- has become a worldwide phenomenon. Pi Day now features pie-eating contests, digit recitations and educational games.

And now, just when you thought the math holiday season was over, it's time for Tau Day!

There's a movement afoot online to celebrate tau, approximately 6.28, instead of the familiar constant pi, which is about 3.14.

Pi -- just think back to grade school -- is the ratio of circumference to diameter of a circle. Tau, on the other hand, is circumference divided by radius.

Chew on that for a minute.

This idea of using a single symbol for 2 times pi is now at least 10 years old, having cropped up in a 2001 essay by Bob Palais called "Pi is wrong!"

But it exploded on the Internet last Tau Day -- June 28 (6/28) -- when Michael Hartl launched the Tau Manifesto, a lengthy treatise about why pi is confusing and should be replaced with tau.

Among Hartl's reasons for using tau:

-- Tau is the ratio of circumference to radius of a circle, and circles are more naturally defined by their radius than diameter.

-- Radians, a unit to measure angles of a circle, are confusing to new learners because of all the factors of 2. There are 2pi radians in a full circle, and pi radians in half a circle. With tau, things become simpler: the full circle is tau radians, and the half-turn is ½ tau radians.

"There definitely are some people who have trouble with the notation," says Hartl, a physicist and entrepreneur. "I would eventually like to see that the mathematical powers that be acknowledge the problem."

And what do the powers that be say? There is a sense that 2 times pi -- or what Hartl calls "tau" -- is important, but it's still a multiple of pi, which is a fundamental constant of mathematics, Ivars Peterson, director of publications and communications at the Mathematical Association of America, told me in March.

Tau Day is "creative," but tau itself is just one particular repackaging of pi. "It will work for some things and not other things," he said.

But Hartl is still trying. In honor of Tau Day, Hartl is giving a talk at California Institute of Technology based on his Tau Manifesto, which he assures us is more entertaining than a normal lecture. And afterward will be a reception with pies -- "twice as many as you might expect," of course.

Hartl isn't alone in his interest in tau. He gets e-mails all the time from tau enthusiasts.

"One commenter said, 'If we don't fix this, everyone at the Galactic Congress is going to laugh at us,'" Hartl said.

Michael John Blake, who made a big splash among nerds for his pi song in March, has taken some of the first digits of tau and put them to music. (Check it out on YouTube). Tau, like pi, has infinitely many digits arranged in an apparently random order, so it's impossible to use them all.

Blake learned about tau when I interviewed him for Pi Day this year. He'd never heard of it before, and had no idea how it would sound, but he took the challenge.

"The tau melody is a bit more melancholy, and the timing gives it that waltzy feel which I love," he says.

But Blake isn't the only one with an interest in turning math into music. His pi song was taken off YouTube because of alleged copyright infringement.

Lars Erickson, a musician in Omaha, Nebraska, is suing Blake in Nebraska District Court. Erickson also used the digits of pi (as well as the constant e) as the basis for the melody of his Pi Symphony, which was performed by the Omaha Symphony Orchestra Chamber group and by Ruse Philharmonic of Bulgaria last year.

"Pi is a math constant. Nobody can copyright pi. The melody made from pi is a melody, and all melodies exist in pi somewhere," Erickson told me Monday. "I only copyrighted the melody of pi to protect my work, just like anybody would copyright their work."

Blake counters that a melody translated from a number cannot be copyrighted.

As for tau, Erickson says he doesn't care for its melody. But Blake has plenty of fans of his tau interpretation on YouTube. And one woman in Australia contacted Hartl and Blake for permission to play it for her Tau Day party.

Hartl hasn't created any rituals for this holiday -- he just wants people to know about it. "Eating twice as much pie probably good enough for now," he said.

And if you're really ambitious, you can post a video of yourself learning all these numbers -- on the Internet, of course.