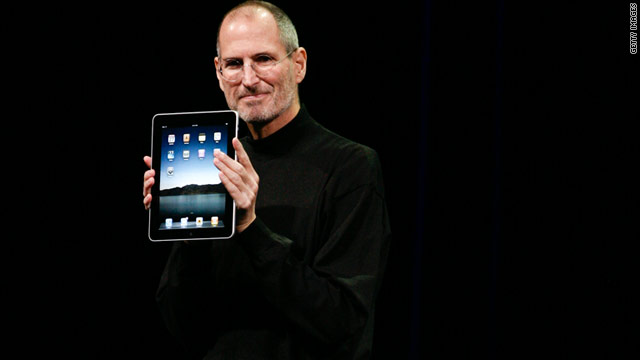 Some laughed when showman Steve Jobs gushed over the "magical" iPad, which would go on to dominate the new tablet market.
STORY HIGHLIGHTS

(CNN) -- Steve Jobs is a technology innovator: the man who, alongside partner Steve Wozniak, sat in a garage and built a computer that would change the world of personal electronics.

But as Apple morphed from a band of edgy outsiders to one of the world's richest companies, the Steve Jobs the public saw changed, too.

As an individual, he's always remained a private man -- the consummate techie geek more interested in helping craft the next big thing than giving interviews or chatting with stockholders.

But as head of Apple, he became a world-class showman. In his trademark jeans and black mock turtleneck, he sold product by selling a vision.

And if his public appearances smacked somewhat of P.T. Barnum (and undoubtedly they did), Jobs wasn't looking for the suckers born every minute. He was looking for fellow true believers to join the fold.

That persona created a host of memorable moments that will live on in the annals of the tech world for years. Here are five of our favorites:

1. The iPhone does it all

For a look at Jobs the showman, it's hard to do better than his reveal of the iPhone in 2007.

To a typically adoring Apple crowd, Jobs runs down groundbreaking moments for Apple, like the Macintosh in 1984 and the iPod in 2001.

He then announces that he'll be introducing three "revolutionary products of this class."

"The first one: a widescreen iPod with touch controls."

Then, he grins as the icons for the three devices beginning spinning on the giant screen behind him until they nearly blur into one.

"Are you getting it?" Jobs said. "These are not three separate devices. This is one device. And we are calling it iPhone."

2. Welcome to the Apple Store

The so-called experts thought a store that sold only one company's products was a bad idea. Jobs, of course, disagreed.

In a 2001 video shown to Apple developers, CEO Jobs strolls through the as-yet-unopened store in Tyson's Corner, Virginia, that would be the first of more than 300 Apple stores worldwide.

Jobs strolls around, showcasing then-novel features such as the Genius Bar and nooks for children's activities.

With nary an iPod or iPhone in sight (the iPod was launched in October that year, with the iPhone following in 2007), Jobs introduced the concept that the stores would be more than just retail space.

"Literally half the store is devoted to solutions," Jobs says in the video. "Because people don't just want to buy personal computers any more. They want to know what they can do with them."

It was easy to mock the starry-eyed enthusiasm Jobs displayed in January of last year when he unveiled a tablet computer called the iPad.

"It's so much more intimate than a laptop," he said. This won't be a purchase, he suggested. This will be a relationship.

Of course, all the gadget went on to do was absolutely dominate the emerging tablet market. By some accounts, the iPad now holds about 90% of the tablet market.

Watch Jobs give the iPad keynote presentation on January 27, 2010.

Or if you prefer, watch this edit that splices together all of the superlatives Jobs and others used that day.

Jobs' 2005 commencement speech at Stanford University was the rare instance when his public and private personas collided.

It was rare enough for Jobs to accept a public-speaking engagement. More surprising by half was that he used it to share some of the most personal details of his life.

He began by stoking the flames on one of the famous details of his story -- that he was in the process of becoming one of the world's most famous college dropouts.

"This is the closest I've ever gotten to a college graduation," he laughed.

He then goes on to talk about being given up for adoption when he was born, of leaving school in part because of the cost to his adoptive parents, and of dropping in on classes for a year-and-a-half after that.

He later frankly discusses his diagnosis of pancreatic cancer and musings on death.

"Your time is limited, so don't waste it living someone else's life," he said.

5. Tablet computers? What are those?

This is one that's only fully appreciated as a performance in retrospect.

At the All Things D digital conference in 2007, a meeting of the tech titans happened when Jobs and Microsoft's Bill Gates sat down together for an interview.

Gates reveals that he carries a tablet computer around with him all the time. He calls the then-nascent gadgets the future of computing.

"I think you'll have a full-screen device that you carry around and you'll do dramatically more reading off of that," says Gates. "I believe in the tablet form factor ... and then you'll have the device that fits in your pocket."

This was, of course, more than two years before Apple's iPad would be unveiled, but it's hard to imagine Jobs and company didn't already have it in the works.

The first time the word "tablet" is mentioned, Jobs swivels in his chair and appears to literally bite his lip.

The first words Jobs says about the future of computers? "The PC has proved to be very resilient."

He eventually allows that "post-PC devices" are part of the future. But his poker face is fun to watch with hindsight.

Watch part of the interview with Jobs and Gates