Robots aren't good at talking to themselves 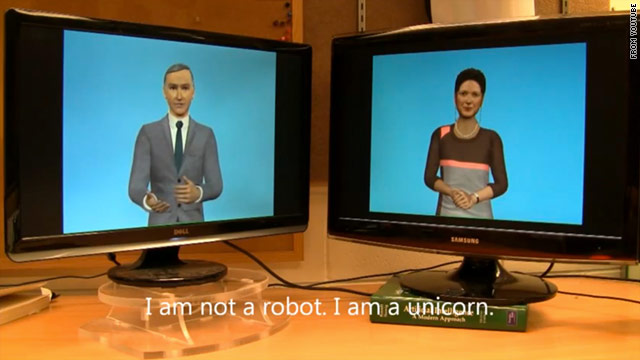 The Cleverbot had a conversation with itself on YouTube recently, with some surprising results.
STORY HIGHLIGHTS
RELATED TOPICS

(CNN) -- Have you ever looked at your smartphone or laptop -- or even a robot, if you're lucky enough to come in contact with one -- and wondered, "What the heck are you thinking?"

Well, if so, here's your answer.

Cornell's Creative Machines Lab posted a video this week of a computer's inner monologue, and it's making the rounds on the Internet not because the machine is having profound thoughts about world domination or the future of technology -- but because the discussion it has with itself is totally ridiculous.

Researchers used the "Cleverbot" for this test case, which is regarded as one of researchers' best attempts to mimic human conversation patterns with computer intelligence. Cleverbot actually "learns" from the conversations it has as it has them, which is fairly impressive, as this episode of WNYC's "Radiolab" podcast discusses at great length.

(Side note: You can have a text conversation with this piece of computer software at Cleverbot.com, and the results are sometimes frighteningly spot-on and sometimes hilarious).

But turn the computer on itself and things go totally awry. The researchers set up two screens, one with a computer-graphics picture of a woman, and one with a man. They talk to each other, but they're both controlled by the same program. Here's a snippet of the dialogue, which is posted in full on YouTube:

Woman: "But you said earlier that you were a robot."

Woman: "I thought you did."

Man: "You were mistaken, which is odd, since memory shouldn't be a problem for you."

I guess that last bit is a nod to the fact that these computers come packed with lots of hardware memory.

That little argument about unicorns and memory could leave you with the impression that a robot's inner monologue is pretty bizarre and vapid. But the computers do talk with themselves about some lofty topics, too, including religion. Here's another piece of the conversation:

The computers seem almost proud of themselves in that moment.

And, as this final bit of dialogue shows, they do think about the future. Or at least it seems like they do:

And that was that.

Lots of researchers around the world are trying to make computer software that can hold a reasonable conversation with humans. There's even a competition to see who can do this the best. As the publication IEEE Spectrum noted on Monday, the next Loebner Prize Competition in Artificial Intelligence will be held on October 19.

Most of the results have been fairly disappointing, however.

All the researchers are essentially trying to pass what's been called the "Turing test," named for tech guru Alan Turing, who was interested in whether or not machines would ever be able to "think."

The test, which he outlined in 1950, basically has humans hold conversations with another person and with a computer. If they can't distinguish between the two, the computer is said to have passed the Turing test.

Computer scientists like to argue about whether a machine has ever passed this test. One, a computerized therapist named ELIZA, supposedly did fool some humans into thinking it was a living being in the 1960s.

But as this week's Cleverbot video showed, if you let a computer program talk to itself, there's probably not a human alive who would buy it.