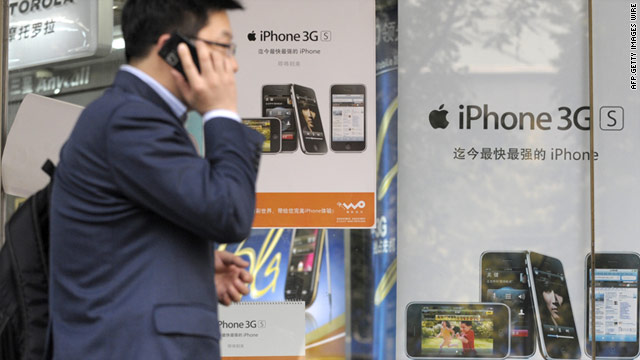 Beijing, China (CNN) -- Apple has defended itself against allegations its suppliers in China committed environmental violations.

In a report, "The Other Side of Apple II," a coalition of Chinese non-governmental environmental organizations detailed alleged pollution caused by Apple's supply chains in China, among those companies handling iPhone and iPad parts.

The 46-page report provided maps showing more than 20 suspected and confirmed Apple suppliers, as well as photos and descriptions of the alleged damage caused to local environments and communities.

"Apple is committed to ensuring the highest standards of social responsibility throughout our supply chain," Apple said in an e-mail reply Wednesday to the organizations making the allegations. Apple said the companies it does business with "use environmentally responsible manufacturing processes."

The NGOs also produced a video and posted on ku6.com, a popular Chinese video-sharing website. The video shows a small river with a yellow hue, allegedly polluted from the discharge of two companies nearby, one of them a suspected Apple supplier.

"We hope Apple will face the reality. The more its business grows, the more pollution it will cause," said Ma Jun, director and founder of the Institute of Public and Environmental Affairs, which spearheaded the report.

Apple said there are "discrepancies" in the list of suppliers mentioned in the report and suggested a "private conference call" with the NGOs behind the report, a move that the Institute accepted.

"This is progress, and we welcome it," said Ma. "We sent a different pollution report to Apple earlier this year, but received no response."

Apple is widely popular in China. Earlier this year Apple's new CEO Tim Cook said the company's revenue in greater China reached $8.8 billion as of Q3 this year, a more than sixfold increase in year-to-date revenue.