How 9/11 inspired a new era of robotics 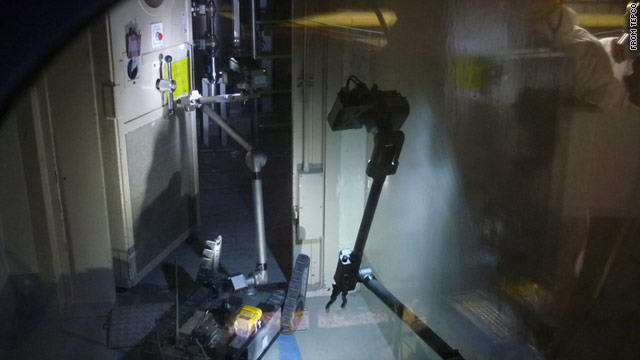 The PackBot, first used in response to 9/11, helps explore an overheating nuclear plant in Japan this year.
STORY HIGHLIGHTS

(CNN) -- When Robin Murphy saw the World Trade Center towers fall on September 11, she knew of an unexpected group that could help respond: robots.

Robots had never been tried in such real-world disasters, but they had gotten much smaller and more nimble in the years before that tragic event. So Murphy, a professor of computer science at Texas A&M University, and a small group of her fellow roboticists decided it was time. The robots were ready.

Shoe-box-size creatures called PackBots, with tank-like tread on their wheels and shipping-crane arms, were asked for the first time to dig through the rubble of the World Trade Center alongside human counterparts. The robots' goals were to search for victims and assess the structural integrity of the debris by sending back rough images from hard-to-reach places.

It was a job no living, breathing person could do.

"Here's a condition where there's no physical space: It's too small for people or dogs to get through, and even if people and dogs could get there, there are parts that were still on fire," Murphy said of the disaster scene that followed the fall of the World Trade Center towers in the terrorist attacks in New York.

"There's no oxygen. You have to wear all this gear. And it's too hot. But, yet, there may still be places where there are still survivable voids," she said, "and, so, there's still a chance."

Robots have been around for decades now, but modern versions of these remote-controlled machines never had been used in response to a disaster until September 11. In the 10 years since, our mechanical friends have continued to advance technologically and become increasingly important members of the teams that respond to all kinds of disasters -- from earthquakes to hurricanes and nuclear disasters to oil spills.

"It was a watershed event," Joe Dyer, chief operating officer of iRobot, maker of the PackBot, said of the robotic efforts involved in the September 11 response.

Those robots, which were being developed by the Defense Advanced Research Projects Agency, were "literally pulled out of the the laboratory and taken to 9/11," said Dyer, who is a retired U.S. Navy vice-admiral.

By land, air and sea

Robots have been involved in pretty much every big disaster since then, and they've been deployed on land, in the air and underwater.

9/11: Remembering Windows On The World

An updated version of the iRobot PackBot rolled into the Fukushima Daiichi nuclear power plant in Japan after the earthquake and tsunami in March. People couldn't safely check on the overheating plant because of nuclear radiation, but robots made their way in easily. They were able to monitor radiation levels and air temperatures and then reported that data back to their human controllers.

People control the PackBot with a joystick that's literally inspired by the Microsoft Xbox and other video game systems, Dyer said. They sit in armored vehicles more than a half-mile from the bot.

The robots communicate over radio frequencies.

Flying robots -- they behave sort of like hummingbirds, Murphy said -- were dispatched after Hurricane Katrina in New Orleans in 2005. They were able to search for people stranded by floodwaters much more quickly than emergency responders who ventured out in rowboats, Murphy said.

And after the BP Gulf oil disaster in 2010, an underwater robot called the Seaglider -- it looks much more like a missile than Rosie from "The Jetsons" -- swam around in those oily and potentially dangerous waters, diving to depths no human eardrum could withstand and recording ecological data.

Without that bot, people would have needed to send ships and scientists all over the Gulf, trolling for data. Despite the fact that these robots range in price from about $50,000 to $400,000, they're economical, Dyer said.

"Robots are both fearless, and they're also very cost-effective and efficient. In the case of Seaglider, it's a tradeoff of technology for human labor."

Some limitations also have emerged in the past 10 years, however.

First, robots haven't had what Murphy referred to as a Lassie-saves-Timmy-from-the-well moment. A rescue robot has never actually found a living person who then was able to be pulled from rubble and saved, Dyer and Murphy said.

But they've made other significant contributions, they say.

After September 11, for example, two of iRobot's machines tested the structural integrity of buildings surrounding the World Trade Center, which kept rescue workers from entering some situations that could have been quite dangerous.

They're also hampered by funding shortages, said Murphy, who is the director of the Center for Robot-Assisted Search and Rescue.

Currently, a "deployment" after a disaster may include only a handful of robots, she said, and they're usually owned and operated by volunteer roboticists like herself, who are trying to see the tech more widely adopted. (They've put together a group called Roboticists Without Borders, which coordinates these responses -- but only if they're asked to).

Ideally, she said, federal emergency response agencies would own robots and could integrate them into their disaster response strategies more seamlessly. Sometimes it can take days to get robots to disaster areas, Murphy said, which makes them less effective than they could be if used sooner.

Finally, the machines are also limited by their own skills. The robots have gotten much smaller over the years, but they're still not able to move through some tight passageways and through particularly nasty rubble.

But there are improvements on the way.

iRobot is trying to give its machines more "autonomy," meaning they could operate with less input from joystick-holding humans.

Other researchers are working to create robots that would look and move like giant worms or caterpillars, allowing them to wiggle through rubble with greater ease.

Murphy said these squirming robots show great promise, but they also run a bizarre secondary risk: They might scare the victims they're sent to rescue.

Her solution: Get the disaster-response robots, over time, to act more human so that even if they look like terrifying metallic snakes, they'll be seen as the helpers they're mean to be.