AT&T bringing hotspot feature to Android and maybe iPhone too 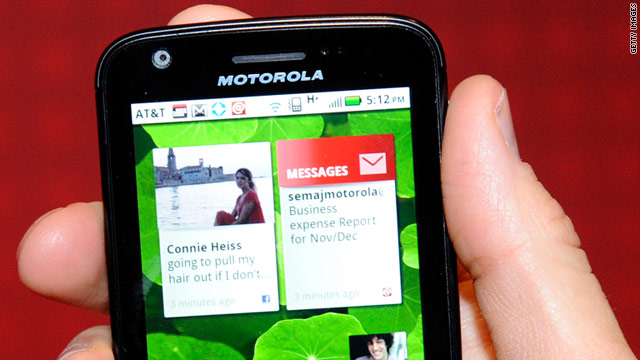 Motorola's Atrix 4G is among the upcoming Android phones for AT&T that will have the Mobile Hotspot feature.
STORY HIGHLIGHTS
RELATED TOPICS

(CNN) -- AT&T has been slow to adopt a feature that lets customers share a smartphone data signal wirelessly to other gadgets and computers.

But a mobile hotspot feature is coming to at least two new AT&T phones running Google's Android operating system. The carrier is also mulling whether it will add the ability to Apple's iPhone through a software update.

Verizon Wireless says its iPhone 4 models, which come out February 10, will have the hotspot feature.

The next version of the iPhone's operating system, iOS 4.3, will have that ability built in, say developers who were provided with access to a beta version. But it's unclear whether AT&T will allow customers to make use of the feature.

"It's something we're taking a look at," said AT&T spokesman Mark Siegel. He declined to comment on negotiations with Apple regarding the feature's deployment.

Once the hotspot feature is enabled, a phone creates its own Wi-Fi access point. Then as many as five devices, usually, such as laptops, iPods, Kindles or other Wi-Fi-enabled electronics, can get online. Enabling the feature generally reduces the phone's battery more quickly.

Some AT&T phones, including the iPhone, offer a feature called tethering. This uses a phone's USB cable or a Bluetooth connection to share the internet connection to a single computer. The extra monthly fee for tethering is comparable to what AT&T will charge for hot spot.

T-Mobile USA offered its free Hotspot feature on Google's Nexus One phone. However, a T-Mobile spokesman said in June that usage of that is "not something the company encourages." Now, T-Mobile offers the feature, with an upgraded data plan, to MyTouch 4G owners.

Sprint Nextel's Evo and Verizon's Droid phones, among others, can act as hotspots.

For Verizon's 3G phones, the internet signal is cut -- and the connected devices dropped -- when on a phone call. That's a limitation of the type of 3G network Verizon uses, but it shouldn't affect the carrier's upcoming 4G phones.

Verizon, with Mi-Fi, was one of the first carriers out of the gate to offer standalone hardware that connects to its wireless data network and shares that signal with other devices.

AT&T, which has perpetually struggled to meet data demand from iPhone customers in the last three years, began selling a Mi-Fi device in November -- more than a year after competitors.

As AT&T rolls out faster networks, including 4G infrastructure with speeds to match Verizon's later this year, the second-largest U.S. carrier by subscribers is finally ready to encourage heavier data usage. That's especially an attractive proposition for the company now that it has a tiered pricing plan in place to charge heavy users more.