Your next phone or tablet could help you predict the weather 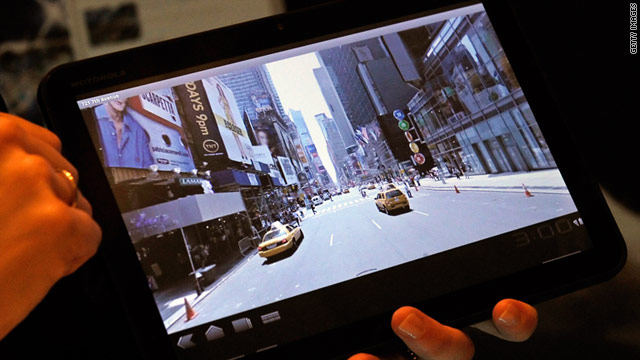 Motorola's Xoom tablet will be equipped with a barometer, which could create new possibilities for users and app developers.
STORY HIGHLIGHTS
RELATED TOPICS

(CNN) -- With the help of a sensor that will be built into upcoming computers, your tablet or smartphone may intuitively tell you when it's going to rain.

Take a look under the hood of the Xoom, a tablet from Motorola Mobility expected to go on sale at Verizon Wireless stores this spring. Set among the tiny gadgetry inside is a barometer.

Meteorologists use barometers to measure atmospheric pressure and predict the severity of oncoming storms. A drop in pressure means a higher chance of rain, and the larger the change, the more likely you'll be scrambling for an umbrella.

In the latest version of its Android mobile operating system, Google added the ability to recognize and use a barometer, should a hardware manufacturer decide to include one in a device.

Google isn't really interested in using a smartphone to tell the weather. (Though Android engineers have been known to construct hobbyist weather balloons in their downtime.) Instead, Android's software can use a barometer to more quickly get a GPS satellite reading for pinpointing a user's location.

Using air pressure, the barometer estimates the device's altitude. Knowing whether someone is driving on an overpass or is downstairs in a subway gives the system an important parameter and eliminates the need to wait for the gadget's antennas to find four separate satellites in orbit.

With each new phone and tablet that hits the market, hardware makers are constantly adding sensors and doodads.

Multigigahertz and dual-core processors from ARM, Qualcomm, Samsung and others make the hardware snappy. Accelerometers and ambient light sensors, both found in many smartphones and tablets, can tell how you're holding the device and can adjust the screen's brightness based on the light in your room.

Apple deployed a gyroscope in the iPhone 4, which allows it to more accurately detect the handset's orientation. Apple says this is especially useful for games on the device. The Xoom and Google's Nexus S phone also have gyroscopes.

As for the barometer, Google is using the sensor only for reducing the time it takes until you see yourself as a blue dot on a map. But that doesn't mean software developers can't dream up more stimulating uses for the technology.

When support for barometers was introduced in version 2.3 of Android, called Gingerbread, Google made sure to unlock the sensor readings to software developers.

Having this new toy in their toolbox has ignited talk within the Android developer community about a new category of possible applications.

"I guess someone could create some ridiculous weather app," an Android spokesman said.

Scott Gilbert, a product manager for a company that's developing weather apps called Swackett for various platforms, lit up upon hearing about the concept. (The app is for accessing weather reports, not conducting your own meteorology experiments.)

"I LOVE that idea," he wrote in an e-mail. "Currently we don't support it -- but you can bet we will in the near future!"

Fitness apps could also benefit from having sensors that track altitude, because bikers or runners exert more effort -- and thus burn more calories -- when they're moving uphill or exercising at higher elevations.

Motorola Mobility says its engineers aren't developing apps for the Xoom to show off the barometer but instead are focusing on prepping the hardware for release. They are thinking of how the sensor might be used, however.

"The app developers always come back with things that surprise us all," a company spokeswoman said. "But definitely one area of particular focus is indoor navigation."

Because the barometer can help determine which floor you're on in a building, developers could combine that information with other sensors, like the compass and accelerometer, to provide an interactive map of an office building or shopping mall.

Barometers can already be found in some hand-held GPS devices and digital watches from Casio. They're mainly used by hikers to determine how high up the mountain they are, or by meteorology enthusiasts who like to graph the changes in atmospheric pressure.

But when all tablets and smartphones can access real-time weather apps, is a barometer the most practical method of building a forecast?

"The best way to find out whether it's going to rain is to go to National Weather Service.com (Weather.gov)," said Eugene Cordero, a meteorology professor at San Jose State University.

However, a world full of consumers wielding mobile barometers could yield scientific dividends, he said.

The planet is full of "microclimates," small areas that can be rainier or colder than the places surrounding them, and "larger-scale weather forecasters miss a lot of them," Cordero said.

If every smartphone and tablet had a barometer inside, the data collected could be transmitted to weather organizations to better predict storms in certain areas, he said.

"If you had thousands of them, then you would definitely know what the pressure scale looks like," Cordero said. "That would certainly be very interesting. I'm sure meteorologists could use that in ways for regional-scale weather forecasting."