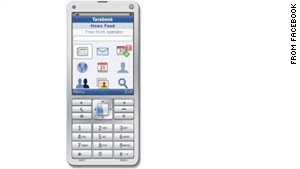 Users will be able to use the Facebook app without incurring data charges. The app is available on the following carriers in the following countries and will launch on more networks and in more areas soon:

On the Facebook blog, the company's mobile program managerMark Heynen writes, "The Facebook for Feature Phones app works on more than 2,500 devices from Nokia, Sony Ericsson, LG and other manufacturers, and it was built in close cooperation with Snaptu."

Among the digerati, we tend to forget that smartphone users are not, in fact, the majority of cellphone owners. As of June 2010, feature phone owners make up a full 79 percent of all mobile phone owners. That number is even higher in countries like China and India.

As a global company with a strong presence in countries around the world -- and a strong desire to dominate in markets outside the U.S. -- Facebook has a responsibility to develop applications for all kinds of users. Other companies are still innovating in the feature phone space, and we're glad to see that Facebook is starting to keep up.