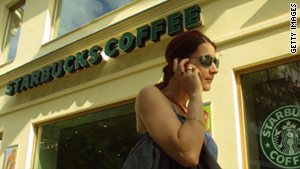 Starbucks this week rolled out a mobile-purchase system that lets customers pay with their phones.
STORY HIGHLIGHTS
RELATED TOPICS

(CNN) -- This week, Starbucks unveiled a new mobile purchase system by integrating its mobile app with a barcode scanner at thousands of Starbucks and Target locations around the U.S., letting customers buy coffee with their smartphones.

Regardless of your opinions about Starbucks, this is a pretty interesting approach to mobile payments since it requires a relatively low investment in hardware and little modification of existing consumer habits.

That could give this kind of approach to mobile payments a significant boost in terms of consumer adoption.

First of all, Starbucks and Target retail locations need only install a barcode scanner on the customer's side of the checkout counter. The app displays a barcode on the phone's screen. The customer then holds the phone in front of the scanner, which reads the barcode and processes the sale against his or her prepaid Starbucks account.

This is considerably simpler than the hardware requirements for the near field communications-based ISIS tap-to-pay system being developed by a coalition of major U.S. wireless carriers. Retail is a tight-margin business, so controlling up-front costs is key to adoption by stores.

As for consumer adoption, research by John Gourville indicates that people are most likely to easily adopt new products or services (such as new ways to pay) if they don't have to significantly modify their behavior to take advantage of them. On that front, for a couple of decades now, consumers of all kinds have been used to scanning barcodes at checkout lines in supermarkets and elsewhere.

Furthermore, many smartphone users are already accustomed to using mobile apps that generate barcodes to be shown or scanned at retail locations as proof of payment, such as Groupon.

According to Starbucks, this payment option is available at the company's 6,800 U.S. stores, plus more than 1,000 Target locations. The Starbucks app is available for many iPhone, Android and BlackBerry models.

Over the next few years, we'll see retailers, credit card companies and other major players experiment with new approaches to mobile payments, point-of-sale discounts or upgrades.

Consumers will need lots of energy to stay abreast of these options. So I guess coffee shops are a good place to start.