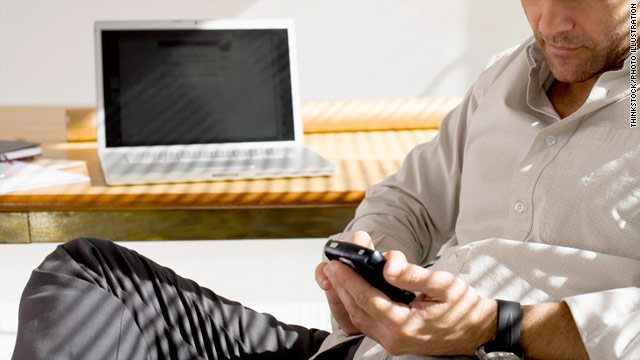 (CNN) -- E-mail is not usually considered as a form of mobile communication, but new research indicates that it might be time to rethink that.

This week, a comScore study indicates that Americans are increasingly shifting e-mail usage from their computers to their mobile phones (smartphones as well as most feature phones support e-mail) and tablets.

According to comScore, the number of people visiting Web-based e-mail sites such as Gmail or Yahoo mail from their computers in November 2010 declined 6% compared to the previous year. Meanwhile, the average number of pages viewed on e-mail sites declined even further, by 15%. These statistics do not include usage of dedicated computer-based e-mail programs such as Microsoft Outlook or Apple Mail.

During the same period, comScore reports, the number of people who accessed e-mail, both Web-based and via dedicated apps, from their mobile devices grew by 36%. Overall, males were 14% more likely than females to use mobile e-mail.

Teens aged 12 to 17 showed the steepest declines in computer-based Web e-mail usage, with drops this year of 24% in unique visitors to e-mail sites, 48% in total minutes spent, and 53% in total pages viewed -- likely a result of more teens messaging through social-media tools such as Facebook. But during the same period, this age group showed a 6% rise in mobile e-mail usage.

ComScore's research echoes earlier research by Nielsen. Their survey found that in May 2010 U.S. mobile users spent far more time (38.5%) doing e-mail on their phones than any other internet-supported mobile activity. Social media was a distant second, at 10.5%.

ComScore vice president Mark Donovan speculates that the growth in mobile e-mail usage is driven primarily by the increasing penetration of smartphones. But the nearly ubiquitous availability and affordability of e-mail on feature phones could also play a strong role.

Feature phone users, still the vast majority of all U.S. mobile users, often need e-mail access and either don't own or frequently aren't near a computer. So they're often willing to pay a modest fee to get mobile e-mail service.