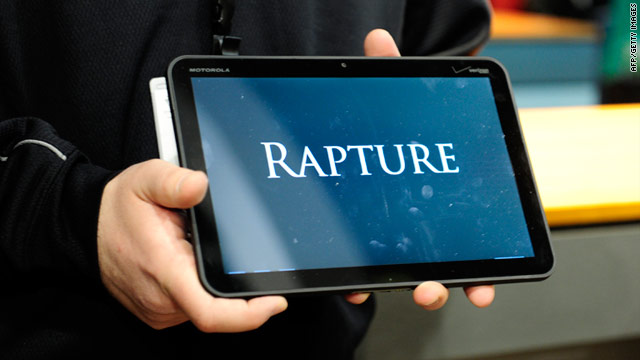 Motorola Mobility plans to release its Xoom tablet in late February. It will be the first that runs Android 3.0.
STORY HIGHLIGHTS
RELATED TOPICS

(CNN) -- The launch of the first Google-backed Android tablets is drawing near.

Flashing another sign of the new software's imminence, Google has posted an updated version of its development kit. This new set of tools for application developers works with the upcoming Android 3.0 operating system.

Android was designed with smartphones in mind. Android 3.0, also called Honeycomb, is the first version from Google geared toward tablet computers.

The first fruit of that work will come late in February, when Motorola releases the Xoom, which works on Verizon Wireless' network. Later, LG and T-Mobile USA will debut the G-Slate.

Google's hardware partners have taken shots at molding Android to fit larger screens. For example, Samsung Electronics did so for its Galaxy Tab, a 7-inch touch-screen tablet.

But these types of products have been criticized for taking baby steps, rather than creating a system tailored entirely for tablets. The Galaxy tablets have also struggled to attract many app makers willing to retool programs for the larger screens, despite Samsung selling a million of them in two months.

Google is expected to have better luck with its official foray into tablets. Not long after releasing the Android 3.0 development kit, blogs and message boards devoted to Android apps were digging through documentation and beginning to experiment with code.

The package provides a closer look at some of the tablet's primary apps. The Web browser looks like Google's Chrome computer program, with tabbed browsing abilities, and integrates tightly with that desktop software for synchronizing things like bookmarks. The camera app has a wheel on the side for toggling effects.

Google's developer information also goes in depth on how people will navigate on a tablet with no physical buttons -- using what's called a System Bar, a sliver displayed at the bottom for accessing the home screen and navigation controls, as well as an Action Bar at the top, which changes depending on the app being used.

Developers have about a month to get apps ready to meet the demand that may come from the Xoom's anticipated release.

But it's not just about software that works on bigger screens. App makers will be able to tap features not present in any other tablet or phone, such as the barometer sensor installed in Motorola's upcoming tablet.