Unlimited data for the iPhone? Don't bet on it long term 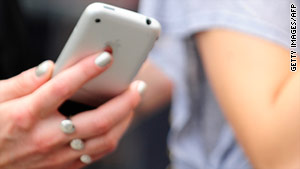 (CNN) -- Lately, Verizon and AT&T have been sending confusing signals to current and would-be iPhone users about how much data service for this trendy device will cost.

Earlier this week, CNN Money reported that in one day, Verizon both announced that it would offer a $30 unlimited data plan for the iPhone, and then backpedaled by saying that offer would be available only for an unspecified "limited time."

And Thursday, The Associated Press reported that, through an unadvertised loophole, AT&T iPhone customers who once had unlimited data plans may be able to switch back. This includes customers who owned an AT&T iPhone before June 2010 (when AT&T introduced its tiered iPhone data plans).

I understand why consumers would want unlimited data plans for the iPhone, or any smartphone. Access to a torrent of fast data on the go is what makes these devices so useful and cool. It's what makes most smartphone users willing to pay $100 or more per month -- to keep that data flowing at will.

Also, I understand that in a more competitive iPhone market, the carriers would be tempted to give consumers the pricing they want in order to lock more customers into new two-year contracts.

But the catch is that there are limits to how well wireless networks can deliver data to the growing profusion of smartphones and tablets. Carriers and consumers need to find ways to work within those limits, or else all those fancy, pricey new smartphones will quickly turn sluggish as network traffic jams mount.

As I wrote last June, the more I learn about mobile network technology, the more I'm amazed that mobile broadband works at all. In the current wireless technological environment, it makes sense for carriers to try to control demand (or help fund network expansion) via tiered data pricing plans.

This might not be so unpleasant for consumers if it were easy for smartphone users to monitor and control their mobile data use. But often, that's not that simple.

Smartphone users can log into their account on their carrier's website or via an app to check their data usage so far. But typically, you can see only the total amount of data you've used so far -- nothing about how fast you're consuming data, or which apps or functions are using the most data.

AT&T and Verizon (at least Verizon LTE) will send customers on tiered plans a text message when they're nearing a data limit. However, most consumers probably don't know the most effective ways to curb mobile data use in response to this alert.

Depending on what's on your phone, where you are (local network conditions) and how you use your phone, simply not streaming video until your next billing cycle may not be enough to avoid extra fees.

A bigger problem is that users have no control at all over one of the fastest-growing parts of their phones' data diet: signaling traffic. This is the constant communication between your network and your mobile device -- not just to determine your location, but to keep your apps updated and to help the carrier manage network traffic.

Smartphone users get charged for signaling traffic to and from their phones. However, for the most part, they cannot control this part of their mobile data use.

For instance, when cell signal strength is weaker, your phone has to work harder to stay in touch with the network (which is why a weak signal drains battery life). And as more data-intensive mobile devices are added to the network, each device may require more signaling traffic to function.

Some handset manufacturers, including Apple and Nokia, have recently adopted a mobile technology called network controlled fast dormancy (NCFD), which reduces signaling traffic. This gets added to existing handsets through software updates, so it could help control consumer data usage and improve how the overall wireless network functions. (As far as I can tell, it does not seem that NCFD support is available for Android or BlackBerry devices yet.)

The Federal Communications Commission is working on freeing up additional frequencies for wireless networks to use, in an attempt to relieve mobile network congestion in the long term. However, carriers and phone manufacturers would have to adapt their equipment to operate on those frequencies. That would take time.

In the meantime, technologies like NCFD can help smartphone users curb their data hog behavior (and stay within their plan limits) to some extent. However, as more people keep using more smartphones more of the time, network management will remain a significant and costly issue for both carriers and consumers.

So despite current mixed signals from the major carriers, I wouldn't be surprised if all-you-can-eat smartphone data plans were to vanish altogether in the next year or two. If you have one now, you might want to hold on to it -- and hope you get to keep it if you re-up.