Hands-on with the Dell Streak 7 tablet 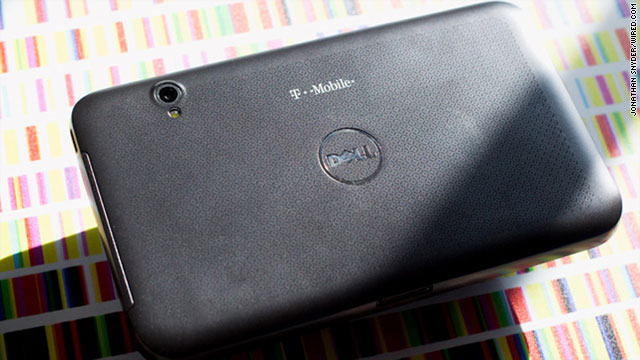 We got our hands on the Dell Streak 7, and our first impressions are generally positive.
STORY HIGHLIGHTS
RELATED TOPICS

(WIRED) -- For those of you with lengthy tech-toy wish lists and not-so-deep pockets, T-Mobile's new tablet offering may provide the answer you've been waiting for.

Beginning February 2, the Dell Streak 7 tablet will be available for $200, after a $50 mail-in rebate and two-year contract, T-Mobile has announced. Off-contract, the tablet will retail for $450.

The new 7-inch Streak is a bump up in size from Dell's last 5-inch offering, as well as a dip in price from the $300 charged for the 5-inch AT&T version.

But unlike its teensy predecessor, the Streak 7 will be able to connect to T-Mobile's HSPA+ 4G network -- although as we've recently noted, the term "4G" seems to be in the eye of the beholder.

We got our hands on the Streak 7 today, and our first impressions are generally positive.

It's chunkier in shape than the iPad, but with rounder edges than the Galaxy Tab. It rests comfortably in one hand or two, suggesting it will serve just as well for passive reading and video watching as it will for more-active browsing.

The interface will be familiar to anyone who's used Android, and neither T-Mobile nor Dell have mucked up the basic operating system with too many widgets.

The screen is bright and somewhat responsive, although it's a little "jumpy." While the screen moves quickly, it's not quite as smooth as the iPad at tracking your finger motions when you swipe or pinch the screen.

It's as if the makers decided to compensate for the touchscreen's lack of sensitivity by making the screen move faster, and the result is that the screen sometimes feels as if it's jumping ahead of your finger.

Web browsing and video playback were all quite smooth, and stereo speakers built into the case provide decent if somewhat anemic audio.

T-Mobile is targeting the lower-priced end of the tablet market with the $200 tag, beating out the Samsung Galaxy Tab, which recently dropped its sticker price to $250, after a $50 mail-in rebate.

Though the Streak's off-contract $450 isn't exactly a bargain-basement price, its still 50 bucks cheaper than the lowest-priced iPad.

The Streak 7's debut comes at the forefront of a 2011 tablet-debut onslaught. Rumors of a March release for HP's new webOS-powered "Topaz" have been circulating recently, with the Android-fueled Motorola Xoom soon to follow.

While the Streak may have a leg up on Motorola in terms of pricing -- leaked screenshots suggest a hefty $800 price tag for the tablet on debut -- it might be at a disadvantage running the antiquated Android version 2.2 (Froyo) against the version 3.0 Honeycomb-powered Xoom.

But despite version-fragmentation issues, a relatively low-cost option like the Streak 7 may be impetus enough for shoppers to jump on one of the first big tablet offerings of the year.