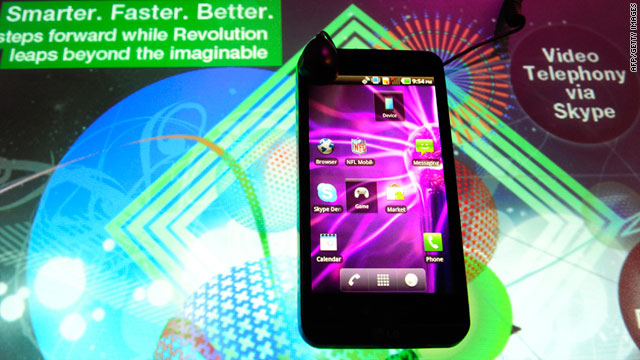 The new voice and video protocol will route calls over the fourth-generation wireless data network that Verizon started rolling out in December.

The goal is for this service to eventually replace the infrastructure that cell phones have relied on for more than a decade, said Brian Higgins, executive director for ecosystem development at Verizon Wireless.

Dispatching calls over the 4G Web, instead of on Verizon's existing cell-phone lines, has the added benefit of enabling calling and Internet use at the same time. Unlike rival networks, Verizon's current batch of smart phones can't do both simultaneously, due to restrictions with the cell technology Verizon uses.

The internet-calling function is tentatively named VoLTE, for Voice Over LTE. (Long-Term Evolution is the name of Verizon's 4G network technology.)

That phone, LG's Revolution 4G, will not have the service installed when it comes out by midyear, Higgins said Tuesday. (A previous version of this report incorrectly said the Revolution will include VoLTE when it launches. The service should be available by next year, Verizon Wireless spokesman Jeffrey Nelson said Tuesday.)

Voice and video calls using VoLTE are initiated much like those on current phones. It's all tied to a person's phone number, rather than to a user name or e-mail address that programs such as Skype use.

For the Revolution and other compatible smart phones, VoLTE will be the default channel that calls will be sent and received on, Higgins said. When outside of a 4G-ready area, the phone will switch smoothly to carry a call over the older network, he said.

In addition to voice and video, text messages will also go over the 4G network.

Verizon's 4G network covers one-third of the United States population and is designed to match the footprint of the carrier's 3G network by 2013, the company said.

Calls between VoLTE-equipped smart phones will sound better, but ones made to phones using the legacy methods will sound the same as they do now.

In 2009, Verizon and AT&T, along with other major networks worldwide, announced plans to standardize this type of technology, formerly called the One Voice Initiative.

AT&T plans to start deploying its 4G LTE network in the second half of this year. The carrier has not discussed any plans about an internet calling service.

Verizon Communications, with its home telephone and broadband businesses, has a somewhat unique strategic position to integrate the online calling service throughout its offerings. Think video calling on your television, for example. Verizon jointly owns the similarly named wireless carrier, along with Vodafone.

The company has no concrete plans to extend the VoLTE technology to computers, Higgins said. A Verizon Wireless spokesman didn't immediately respond to a question about whether smartphone internet calling could be used over a Wi-Fi connection.

Whether the VoLTE name will change or how extensively it will be marketed hasn't been decided, Higgins said. The "high-definition" audio fidelity will be a major selling point, he said.

Of course, video calling will be a plus as well. How long until we see Verizon's pitchman asking, "Can you see me now?"

Apple began heavily advertising its video calling protocol after the release of the iPhone 4 last summer. As on AT&T, Apple's FaceTime software will only work over a Wi-Fi connection initially, but Verizon Wireless and Apple technicians are already testing FaceTime calls over 3G.

Skype makes an application for the iPhone that allows for video chat -- albeit a grainy-looking one -- over a 3G network. Verizon is partnering with Skype to test and launch a video conferencing feature, Marni Walden, Verizon's marketing chief, said in an interview. Skype video chat will work on the Revolution phone.

Three Verizon Wireless executives declined to comment on how VoLTE would be priced.

Walden acknowledged the threat that internet phone services, like Skype, can pose to Verizon's business, which relies heavily on revenue from subscribing to minute-metered voice plans. The newest versions of Android, for example, have a Web calling technology built in.

With VoLTE, Verizon is attempting to get ahead of the train.

"We're not going to run away from the innovation that's happening out there. We're going to make sure we innovate it better or integrate it better on our devices than anyone else, as opposed to putting up a walled garden," Walden said. "With the data capabilities that the 4G LTE network is going to provide, there are opportunities to grow revenue."

"Eventually, operators are going to want all of their traffic on their LTE and next-generation network, and that includes the voice traffic," Redman said. "They're not ready to do that today because delivering voice services over LTE is more expensive."

"CDMA is not going away," he said. "CDMA is an efficient form of carrying voice communication today and many years into the future."

But Verizon may want to accelerate the rollout of VoLTE as a way to offset the oncoming load from new iPhone customers. On Thursday, Verizon and Apple stores begin selling the new iPhone 4, which uses the 3G network.