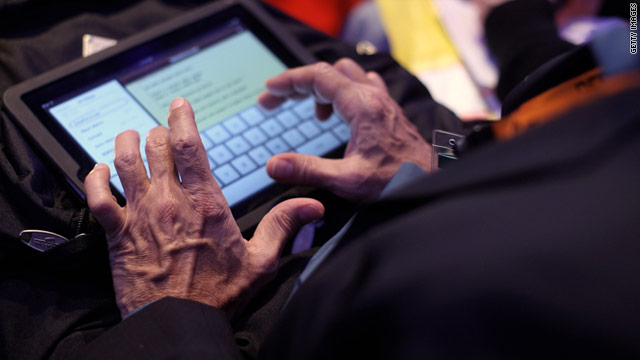 A prototype of the iPad 2 was apparently spotted by a Reuters reporter after the launch of News Corp's iPad publication.
STORY HIGHLIGHTS

(Mashable) -- Apple's production partners are already hard at work on the new model of iPad, according to a report in the Wall Street Journal.

The fact that Apple is working on an iPad 2, of course, is common knowledge. The famously tight-lipped company rarely talks about upcoming product launches, and isn't talking now. But Apple has never denied that it intends to follow up on one of its most successful products.

Nearly $5 billion worth of iPads have been sold in the three quarters since its launch. And a quick glance at the history of the iPhone, which launches a new model every year, suggests that we should expect to see the iPad 2 right around the first anniversary of its predecessor's launch: April 3, 2011.

A prototype of the iPad 2 was apparently spotted by a Reuters reporter after the launch of News Corp's iPad publication, the Daily, last week. And an unconfirmed report from DigiTimes in December said that Foxconn, the Chinese makers of the iPhone and iPad, had been ordered to manufacture the iPad 2 in market-ready quantities by the end of February.

The Journal report, which carries three bylines and cites "people familiar with the matter," offers a few more nuggets of detail. It confirms the widely-held belief that the iPad 2 will have a front-facing camera, enabling use of the Facetime videoconferencing app.

A look at the iPad and tech trends
RELATED TOPICS

It says that the 3G version will again be available on Verizon and AT&T, with Sprint and T-Mobile still shut out. But it contradicts earlier reports that Apple will endow the iPad 2 with a higher-resolution screen, much as the iPhone 4 had significantly higher resolution than the iPhone 3GS. Apple is likely still working on a higher quality iPad display -- it just won't be ready for the iPad 2.

So will a slightly improved Apple tablet with camera be enough to persuade millions of iPad users to upgrade? Are there other bells and whistles we don't know about yet? We have previously reported on rumors that the new device will have an SD Card slot, and that it will feature rear-facing and front-facing cameras. (Click here for our comprehensive roundup of iPad 2 rumors).

We'll know when Apple's acting CEO Tim Cook takes the stage, if this product timeline is accurate, in a few months' time.