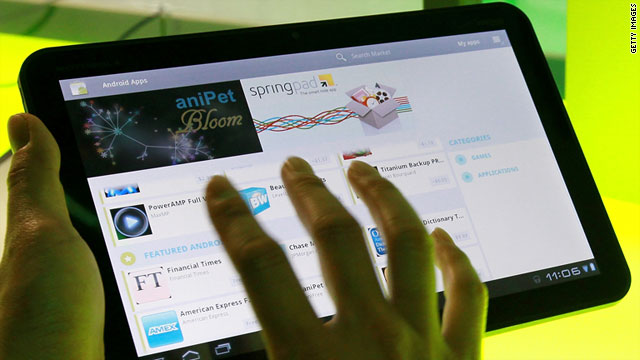 Google cut the ribbon for the Android Market website last week, but some are complaining it doesn't work right in their language.
STORY HIGHLIGHTS
RELATED TOPICS

(CNN) -- Shopping for some aplicaciones?

Google is surprising and frustrating some visitors to the new Web-based Android app store by greeting them in a foreign tongue.

The website appears to choose which language to display based on the geographic location of the visitor's internet address, and that detection method can be pretty good at guessing a person's language preference.

But for people traveling abroad, living in foreign countries or accessing the Web through an international proxy service, Google's guess can be awkwardly wrong.

On other Google sites, people can navigate to domains that cater to a specific language, or designate their choice with a link called "language tools."

No such navigation is available on the online Android Market.

A Google spokesman said the Android Market site is designed only for United States-based English speakers. More languages will be added to the site in coming weeks, the spokesman said.

There was no mention of this restriction at last week's ribbon cutting for the Android Market website. The announcement on the Android Developers blog did, however, say it would start out as English-only.

Some Android fans were miffed to learn that Google seemed not to cater to them.

Will Deasy from Cork, Ireland, tipped off CNN to the language problems with the Android Market website. Deasy was traveling to South America and lamented the "missing feature" for setting a language.

This comes as Android phones continue to surge in popularity.

Handsets running Android made up 22.7% of all smartphones sold worldwide last year, according to a report from research firm Gartner. Many of those customers do not live in the United States.

There is a work-around for the problem, however. On Google's support forum, users suggested adding this text -- "?hl=en" -- to the end of the site's Web address in order to tell the browser to load the site in English. Swap "en" for "es," and you get Spanish; or "fr" for French; and so on.

In another message, an Android user wrote: "I am traveling, and I want things in English, but I get Dutch instead. It's awful."

Julie Vetter, on the support board, offered this plea:

"Google, please respond, in any language."