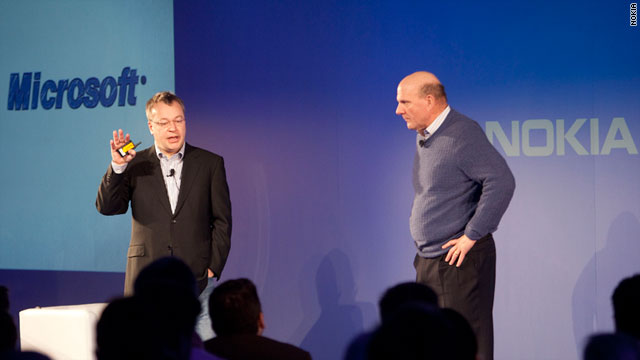 As part of a new agreement, Nokia will adopt Windows Phone as its choice smartphone platform, and Bing will become the default search engine on all of Nokia's phones.

In return, Nokia will provide services such as mapping programs and other software to help flesh out Microsoft's offerings, as well as leverage the handset giant's relationships with cellular carriers.

The companies' chief executives jointly penned a news release that went out early Friday morning in advance of the formal announcement in London. The materials describe the strategic partnership as "long term," though no timeframe was given.

Some experts say Nokia may be better served by looking to Google's Android platform instead. Android, a system provided to manufacturers for free, has quickly risen as the biggest challenger to Nokia's mobile dominance.

The Symbian platform from Nokia has shown versatility, but it hasn't aged well. The system is criticized for being clunky and especially awkward in an increasingly touchscreen-focused environment.

Still, Nokia remained the top seller of smartphones last year, with 37.6%, according to a report from research firm Gartner. But the cell phone giant had dropped from the 46.9% it held the year before, the data shows. Meanwhile, Android phones had 22.7% of the market in 2010, compared to about 4% the year prior.

(In the U.S., the numbers are stark. Nokia's presence there has almost entirely vanished.)

Like Nokia, Microsoft's global share of the heating smartphone segment fell during the same period -- by more than half, the Gartner data shows.

But Microsoft unleashed a major new smartphone system late last year, called Windows Phone 7. Microsoft's hope is that this will turn the company's fortunes in the mobile industry around.

In the few months it's been available, Windows Phone has gotten off to a slow start. Major manufacturers including Samsung Electronics and HTC initially pledged support for the software with launch devices, but most are now banking on the success of Android.

Nokia had begun developing a new system called MeeGo, along with Intel. This initiative will be dropped in favor of Windows Phone.

With a global juggernaut like Nokia signed on, Microsoft's chances at success have improved, experts say. Stephen Elop, Nokia's first non-Finnish CEO, was formerly an executive at Microsoft.

Elop sent employees a dramatic message this week saying that Nokia is "standing on a burning platform." In the e-mail, he highlighted the limitations of Symbian and contrasted it with Apple's and Google's successes at stealing away market share over a short time.

"Nokia, our platform is burning," Elop wrote in the widely circulated memo. "We are working on a path forward -- a path to rebuild our market leadership."

Elop, along with Microsoft CEO Steve Ballmer, will expand on this path in the meeting with analysts Friday morning.

"Nokia and Microsoft will combine our strengths to deliver an ecosystem with unrivalled global reach and scale," Elop said in a statement. "It's now a three-horse race."