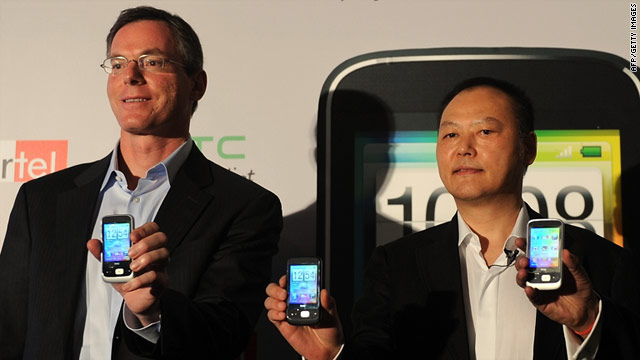 (CNN) -- With the next wave of feature phones, we may soon be able to say goodbye to those junky, pictureless websites catered to "mobile-optimized browsing."

Qualcomm has inked a deal with Opera Software to install the Opera Mini application as the default Web browser on its popular feature-phone platform, representatives from the two companies said.

Opera Mini will be included with Qualcomm's Brew Mobile Platform later this year, they said.

First, it will be shipped to manufacturers in the next few months, and then as early as two months after that, those handsets could begin showing up in stores, said Roy Satterthwaite, Opera's senior vice president for the Americas.

Qualcomm's Brew MP is the successor to the Brew platform for feature phones, which has sold more than 250 million handsets from more than 70 manufacturers worldwide, the chip maker says.

AT&T plans for all of its feature phones to eventually run on Brew MP, the company has said. The carrier launched the first such "quick-messaging phone," called HTC's Freestyle, on Sunday.

Is the smartphone taking over?
RELATED TOPICS

In addition to the big commitment from AT&T in the United States, Qualcomm and Opera see major opportunity for mobile browsing to proliferate in other territories. India, China, Central America and South America, where smartphone growth is slower partly because of poverty, are target areas, said Marc Nijdam, a director of Brew MP development.

"These are big growth markets for the feature phone," he said. "Brew MP has been very successful there."

Unlike smartphones, feature phones lack the capacity to interpret graphics-heavy Web pages or games. That's done by design, so that the handsets can be produced and sold for less.

Opera Mini bypasses hardware limitations by processing Web pages on the company's servers and then sending back a small file to the phone. This usually produces a page that looks almost identical to what a full-featured browser on a computer or smartphone would display.

Opera's method has the added benefit of reducing the load on cellular providers' networks. "The carriers are looking for a way to save their own data costs," Satterthwaite said. "And it's the fastest browsing experience available."

For anyone who's opened the Web browser on a flip phone, probably by accident, you'll find a clumsy portal to a less-traveled underbelly of the internet. For these devices, many websites offer Wireless Application Protocol (WAP) versions, which are bare-bones pages.

Packaging a browser capable of displaying media-rich websites could eliminate the need for Web developers to build these extra versions. That played a role in Qualcomm's decision to partner with Opera, Nijdam said.

"We can just offer a much better experience than doing the traditional WAP-based approach," he said. "Having a common browser that works across a huge swath of these devices will help to sort of standardize the development."

Software developers have made plenty of browsers, but Qualcomm hadn't anointed one as the preferred app until now. Phone makers can freely replace Opera with a browser of their choosing, but Nijdam doesn't expect that will happen often.

Opera Mini has long been available to download for customers with feature phones running Brew. The app, available for several mobile platforms and soon for Apple's iPad, has 90.4 million people using it at least once a month and has been popular on Brew, Opera said.