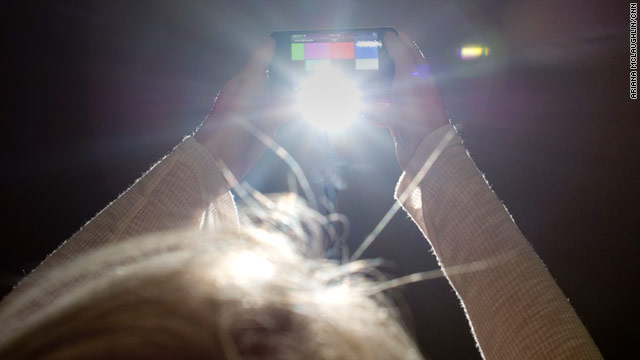 (Mashable) -- The word on the street tonight is that Apple is toying with the idea of a much larger screen for the iPhone 5.

Other iPhone 5 rumors include a slide-out keyboard and a more competitive camera.

These rumors may have been spawned by glimpses of as-yet unfinished prototypes which may never come to market; they could be complete fiction. Or they could also represent part of the future of Apple's iconic phone.

The bulk of this iPhone 5-related gossip comes from a Taiwanese blog with a high rate of accuracy on previous Apple leaks. The screen-size rumor comes from DigiTimes.

The interesting thing about all these rumors is that each one suggests Apple is more concerned than ever about competing with Android devices, many of which feature huge screens, massive cameras and physical keyboards already.

For example, many top-of-the-line Android models feature 8-megapixel cameras in contrast to the iPhone 4's 5-megapixel model. A couple devices in non-U.S. markets even top that spec; the Altek Leo features a 14-megapixel camera. Without question, the trend is toward more megapixels with every passing month.

And some of these Android devices feature screens as large as 4.3 inches. Android devices with screens in the 4-inches-and-over category often sport kickstands and are lauded for their multimedia capabilities -- or derided for being slightly impractical and unwieldy, depending on the user's perspective.

With a better camera and a larger screen, it might sport the specs to intrigue those whose loyalties lie with the best hardware over the brand name.

The physical keyboard rumor, however, is a horse of a different color. A handful of Android and RIM devices have been holding sway over the business and content-creating crowd with their über-efficient text entry.

But the enterprise isn't a market Apple has typically courted in the past; to do so now, we suspect they'd have to have a virtual keyboard option alongside a physical keyboard option -- an extremely atypical move for the company.

Which of these rumors -- if any -- do you think are true? Give us your opinion in the comments.