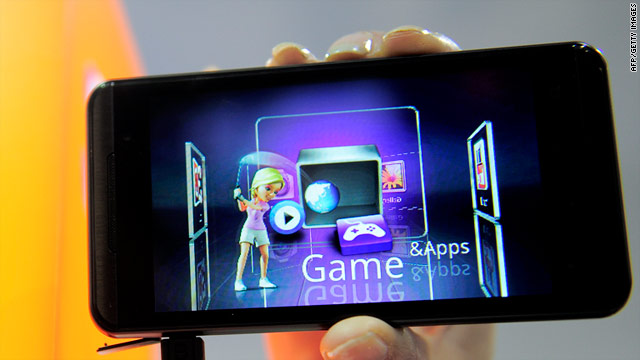 (CNN) -- What's better than receiving a text message? How about a text in 3-D?

That's the potential of a smartphone from LG, which has a large 4.3-inch touchscreen capable of displaying three-dimensional images without the need for special glasses. A pair of cameras on the back allows users to take 3-D photographs and videos.

LG is hoping its groundbreaking phone, with the hottest entertainment-focused technology on the market, will ride the 3-D wave being pushed by Hollywood, TV networks and other creators of media content.

The method LG uses to accomplish this effect is called "switchable barrier," which is similar to how Nintendo's 3DS can do 3-D without requiring the player to wear glasses.

LG showed the phone, called the Optimus 3D, this week at Mobile World Congress in Barcelona, Spain. The company didn't provide a release date or price, though spokespeople have said it will be affordable.

Demonstration units on display at the conference let attendees watch 3-D movies. They also provided a few 3-D games to play. That could pose a threat to the temporary monopoly Nintendo was poised to get on portable 3-D gaming when its handheld game system launches in March.

With the proliferation of 3-D TVs in the market, the Optimus 3D could help people begin shooting and archiving cutting-edge family pictures and home videos. The phone can hook up to a 3-D TV with a cable to display media on the big screen.

LG's G-Slate, a tablet that runs Google's Android 3.0 software and is slated for a March release, can also capture 3-D pictures and video. The tablet can't display 3-D on its screen, but like the phone, the G-Slate can be connected to a 3-D TV set.

The Optimus 3D has caused quite a stir this week at Mobile World Congress. However, so far it offers no spinning 3-D text messages or eye-popping dial pads, meaning Android app developers have a new mission to fulfill.