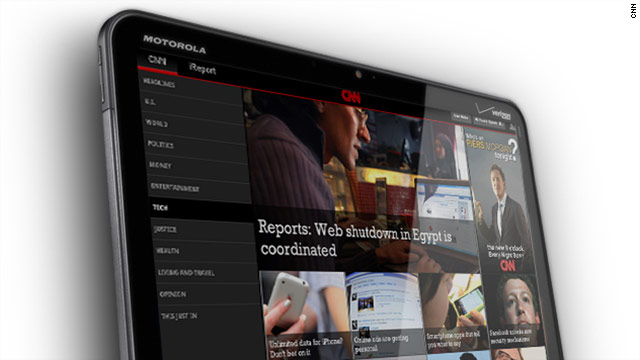 (CNN) -- CNN on Thursday became one of the first companies other than Google to offer an app designed specifically for Android tablets, including the just-released Motorola Xoom.

The free app, which is similar to CNN's app for Apple's iPad, the current leader in the tablet space, differs in that it lets tablet users submit their own news to CNN iReport.

The iPad doesn't have a camera to let users to take photos of news events or film themselves giving their own takes on the news. By contrast, some Android-based tablets, like the Xoom and the Samsung Galaxy Tab, do include front and rear-facing cameras.

The new app aims to bring citizen journalism into the tablet age.

"The CNN app will expose tablet users to the best submissions from our hundreds of thousands of iReporters across the globe, as well as enable them to submit their own iReports and participate along with us," CNN's vice president for mobile, Louis Gump, said in a written news release.

For now, the app is only available in the U.S. Android Market.

The CNN Android tablet app -- designed specifically to work with the newest version of the Android operating system, called "Honeycomb" -- features a tiled, broadsheet layout, somewhat similar to the popular news aggregator app called Pulse. It runs in two modes -- one that highlights news for an international audience and another that focuses more on a U.S. audience, and includes hourly audio news updates from CNN Radio.

"The app includes the ability for users to comment alongside content on the screen or share text stories and images from the app via e-mail, Facebook and Twitter," a CNN news release says. "Users can also flip through story headlines and images directly on their home screen by accessing the app's layered image widget."

Many apps designed for Android phones will work on tablets, too, but they don't always run as well as those designed specifically for the tablet's larger screen.

The blog VentureBeat writes that apps like CNN's "are common on the Apple iPhone and iPad," but not on Android tablets.

"Google really needs to get marquee apps running in a beautiful way on Android tablets if it has any hope of catching up with the iPad. The tablet market is going to be the subject of a huge tug-of-war this year," writes Dean Takahashi.

MSNBC writes the popularity of of Android tablets rests on apps.

"The success of the Android tablet program will be measured by what others build for it; no verdict on this premier device is worth acting on until we know more about the apps," says Wilson Rothman.

Jason Chen of Gizmodo writes the CNN Android tablet app "looks quite similar to how it is on the iPad, but, you know, more Androidy."

Google's Android Honeycomb operating system, which was designed for tablets, was announced on February 2; and the Motorola Xoom, the first tablet to run this operating system, went on sale on Thursday for $600 with a two-year Verizon contract.

Apple on Wednesday is expected to unveil a new version of the iPad, which is rumored to include a camera.