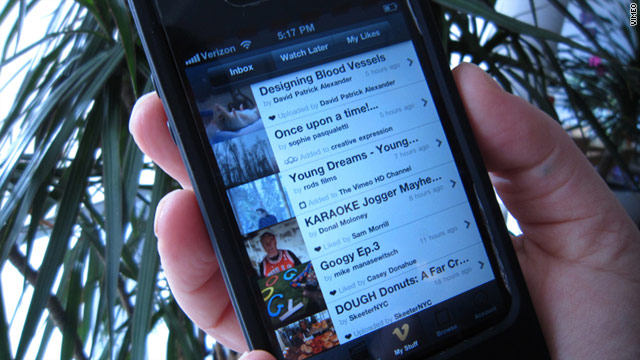 The team developing an app for the online video-sharing service decided its software should match or exceed that of a similar app created by Apple -- and, at the same time, undercut Apple's price.

Nearly a year behind schedule, Vimeo's top brass thinks it finally has an answer. The InterActiveCorp company will release a free iPhone app Tuesday that lets users shoot and edit video as well as view clips from the website.

Work on the app was primarily focused on the recording and editing aspects because Vimeo spent last year tuning its website to enable smartphones to view its videos reliably. That's unlike Google's YouTube, which first created ubiquitous apps for many smartphone platforms and then overhauled its website to work well on mobile browsers.

For mobile video in general, the editing and upload side of the equation has left plenty of room for improvement. Often, phones lose cellular connection, forcing a nearly finished video upload to start from scratch due to errors. Vimeo built a system that lets users resume from where an upload left off.

The ability to watch other Vimeo users' videos was added later by request, and being able to search and view a video from the site's wider database will be added in the next version, said Andrew Pile, Vimeo's head of product and development.

Apple introduced the iMovie app for the iPhone last year, which spurred Vimeo to rethink its approach. This month, Apple released a new version of iMovie with more editing features and a button for exporting a video to Vimeo.

"We spent a lot of time keeping up with that," Pile said of using iMovie as a benchmark. "We chose a very hard thing to develop because Apple was working on something themselves, so we were always a step behind."

As of last July, Vimeo management had expected apps for the iPhone and Android to launch by the end of that summer.

"We're behind in our app development," Dae Mellencamp, Vimeo's general manager, said then.

"We didn't want to put up a generic app," Deborah Szajngarten, a Vimeo spokeswoman, said in an interview last year.

An Android app has been "shelved" for now because the operating system is difficult to develop video-editing programs for, Pile said.

Apple has challenged Vimeo again, with a new version of its $5 app that lets users upload videos to Vimeo from their phones and also work in a well-designed iPad interface. The new Vimeo app is not optimized for the iPad, and such a version is a long way off, Pile said.

Still, Vimeo, which partnered with CNN iReport for an editorial project at South by Southwest this year, believes it has a compelling program at an attractive price.

"We've been working on it for a really long time," Pile said. "It's definitely the most fully featured video-editing app out there for the price."