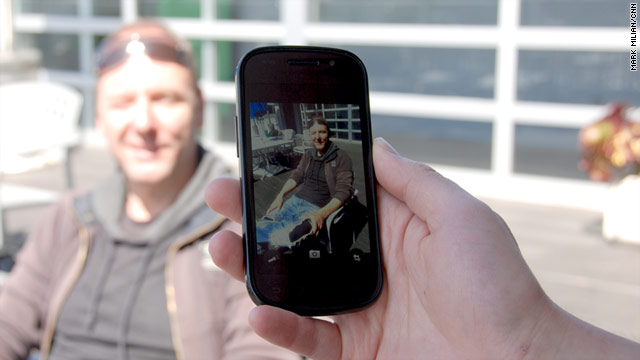 Santa Monica, California (CNN) -- Google is working on a mobile application that would allow users to snap pictures of people's faces in order to access their personal information, a director for the project said this week.

In order to be identified by the software, people would have to check a box agreeing to give Google permission to access their pictures and profile information, said Hartmut Neven, the Google engineering director for image-recognition development.

Google's Profiles product includes a user's name, phone number and e-mail address. Google has not said what personal data might be displayed once a person is identified by its facial-recognition system.

"We recognize that Google has to be extra careful when it comes to these [privacy] issues," Neven told CNN in an exclusive interview. "Face recognition we will bring out once we have acceptable privacy models in place."

While Google has begun to establish how the privacy features would work, Neven did not say when the company intends to release the product, and a Google spokesman said there is not a release timeline.

The technology wouldn't necessarily be rolled out in a separate app, a Google spokesman said. Instead, facial recognition could be issued as an update to an existing Google tool, such as its image search engine.

Google has had the technical capabilities to implement this type of search engine for years.

Just as Google has crawled trillions of Web pages to deliver results for traditional search queries, the system could be programmed to associate pictures publicly available on Facebook, Flickr and other photo-sharing sites with a person's name, Neven said. "That we could do today," he said.

But those efforts had frequently stalled internally because of concerns within Google about how privacy advocates might receive the product, he said.

"People are asking for it all the time, but as an established company like Google, you have to be way more conservative than a little startup that has nothing to lose," said Neven, whose company Neven Vision was acquired by Google in 2006. "Technically, we can pretty much do all of these things."

In 2009, Google acquired a company called Like.com, which specialized in searching product images but also did work in interpreting pictures of people. Google has also filed for patents in the area of facial recognition.

As Google's size and clout grow, so does the chorus of critics who say the company frequently encroaches on people's privacy. Over the years, Google has made various missteps.

The company agreed to pay $8.5 million last year in a legal settlement over grievances that its Buzz social-networking service published the names of people with whom Gmail users regularly communicated. Google quickly fixed the problem, but its repercussions are still being felt: On Wednesday, Google announced it had reached an agreement with the U.S. Federal Trade Commission to receive an independent review of privacy procedures once every two years.

Google also faces numerous inquiries from governments regarding information collected by its Street View vans. Developers who report to Neven work on aspects of that street-level photography initiative -- mainly privacy-minded features such as the automatic blurring of faces and license plates, he said.

Google also is concerned about the legal implications of facial recognition. Even during trials among its own employees, Google has taken steps to ensure testers have explicitly agreed on record to try out the service.

The novelty of this sort of product may help attract early adopters. But policies would need to be uncomplicated and straightforward to keep users from abandoning it over privacy concerns, experts said.

"Online, people don't think about the privacy concerns; they think about the fun activities they're doing," said Karen North, director of a University of Southern California program that studies online privacy. "They're going to have to figure out a way where people who like the ease and fun of some of these technologies ... online don't feel burned at any given point. Because once they feel burned, they'll opt out."

North said she believes Google has a tendency to push boundaries in order to outdo competitors. The service could push too far by, say, aggregating every photo of a user it finds on the internet without giving that user an easy way to erase certain images, she said.

"Google, in all the best ways, has put itself in a very difficult position -- that no matter what they do, they have to do it biggest and best," North said. "They have trouble starting small and building up because they're Google."

Google acknowledges the nefarious ways someone could leverage facial-recognition technology.

Many people "are rightfully scared of it," Neven said. "In particular, women say, 'Oh my God. Imagine this guy takes a picture of me in a bar, and then he knows my address just because somewhere on the Web there is an association of my address with my photo.' That's a scary thought. So I think there is merit in finding a good route that makes the power of this technology available in a good way."

Neven and a Google spokesman described the facial-recognition app concept as "conservative" in relation to privacy.

"I think we are taking a sort of cautious route with this," the spokesman said. "It's a sensitive area, and it's kind of a subjective call on how you would do it."

While the opt-in requirement limits the app's utility, Neven foresees many circumstances where people would agree to be found.

"If you're an actor in L.A., you want to have everyone recognizing you," he said, sitting outside in the sun at Google's beachside office some 12 miles from Hollywood.

A facial-recognition app could tie in to social-networking initiatives Google is said to be working on. For example, people looking to connect online could use their phones to snap each other's pictures and instantly navigate to that person's profile, rather than having to exchange business cards or remember a user name.

This month, Google redesigned its Profiles pages in a change that more closely resembles Facebook's site. On Wednesday the company announced a new social-search tool, called +1, that allows people to share helpful search links with their friends.