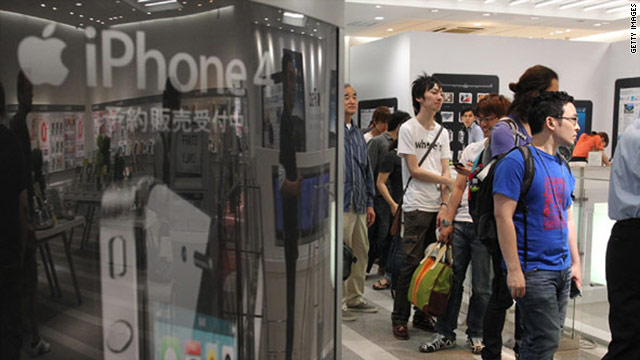 Apple fans lined up last year for the iPhone 4. But when they might see an iPhone 5 remains an open question.
STORY HIGHLIGHTS

(CNN) -- It doesn't take much to get the tech world talking about the iPhone.

The internet has swirled with speculation in recent weeks about a release date for Apple's iPhone 5, and even whether the company will update its iconic smartphone at all this year.

Now, the most tenuous of news reports has ramped the talk up again.

A South Korean news site reported this week that Apple plans to release the phone in the fourth week of June. According to a translation by the MacRumors site, ETNews.co.kr reported that "Apple has confirmed" that time frame.

There are a few problems here:

It seems highly unlikely that the typically tight-lipped Apple would have confirmed a release date. The report also says the phone will be released in South Korea the same day it goes on sale in the United States.

Possible. But, for comparison's sake, the iPhone 4 was released there about three months after its U.S. debut.

And, for what it may or may not be worth, the South Korean report appeared on April 1.

But as Western news outlets jumped on the report, excitement spread.

The words "iPhone 5 release date" were briefly at the top of Google's Hot Topics list Tuesday morning, and multiple U.S. blogs were following up the MacRumors report -- albeit skeptically, in most cases.

The original iPhone, the iPhone 3GS and the iPhone 4 all had June releases. The iPhone 3G was released in early July. But reports have said that Apple plans to focus specifically on software, not hardware, at its Worldwide Developers Conference, scheduled from June 6-10 this year.

One X-factor here could be the earthquake and tsunami in Japan.

Earlier this week, comments by Sony CEO Sir Howard Stringer suggested that his company is making a camera sensor for the new iPhone. He said sensors for Apple will be delayed because of damage to 15 of Sony's plants in Japan.

It's also hard to know how Apple CEO Steve Jobs' medical leave of absence has impacted development of the newest version of the phone.

So the only thing that seems certain about when Apple will release the next version of the iPhone is ... that nobody in the tech media really knows.