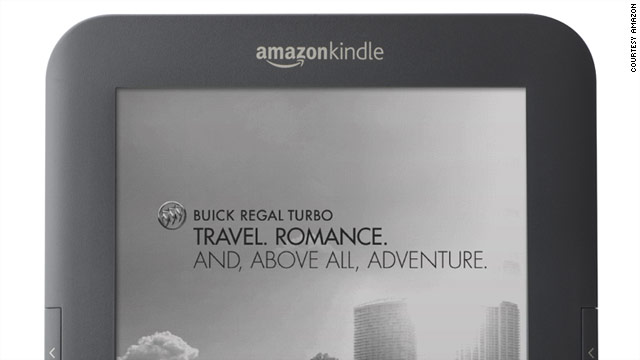 A new Amazon Kindle will be $25 cheaper than before, but it features ads built into the device.
STORY HIGHLIGHTS
RELATED TOPICS

(CNN) -- Seeing ads on portable devices is nothing new. Open a smartphone app, and you're likely to get hit with ads on the screen. Same for mobile browsers.

But Amazon, maker of the popular Kindle e-reader, took this concept to an entirely new level on Monday when it announced a new version of the Kindle that is $25 cheaper and has inescapable advertisements built into the machine.

Think of an smartphone that requires its owner to watch ads as a screensaver, a TV that makes you watch an ad in order to turn it on or a gadget that requires you to learn about some used car special in order to access new features.

This could be the future if the $114 ad-embedded Kindle takes off.

The Kindle ads don't show up in the books a person loads on the device. Instead, they're built into the framework of the gadget itself, showing up as screen savers and at the bottom of the device's home screen.

"Special offers and sponsored screensavers display on the Kindle screensaver and on the bottom of the home screen -- they don't interrupt reading," Amazon says on its website.

The device, on pre-order now, ships May 3. It connects to the internet with a Wi-Fi connection instead of a cellular data network, making it similar to its predecessor except in the ads and the price. The Wi-Fi-only Kindle without ads is $139.

Although the idea seems new, this apparently isn't the first attempt by a gadget maker to put ads on the device instead of attached to media.

Apple, whose iPad competes with the Kindle as a device for reading digital books, filed a patent application in 2008 that would allow it to embed advertisements directly in several of its popular gadgets.

The New York Times, which reported on this development in 2009, notes that, as with all patents, it's unclear whether the Apple idea will really show up in products.

"The technology can freeze the device until the user clicks a button or answers a test question to demonstrate that he or she has dutifully noticed the commercial message," the Times wrote. "Because this technology would be embedded in the innermost core of the device, the ads could appear on the screen at any time, no matter what one is doing."

Reaction to Amazon's ad-Kindle has been mixed in the tech blogosphere.

The hardware-as-ad ideas is a good one, but the Kindle's price didn't drop enough to make it worth the tradeoff, writes Erik Sherman at the site BNET.

"At one time, ads would probably have come across as annoyance-ware. However, things have changed. People are used to seeing ads in browsers. Watch television and there are all those annoying come-ons for other shows that play in the bottom left corner of the screen even while the current program is running. Play a DVD movie and you have all those trailers for other films.

"Consumers are probably desensitized enough that many could consider having ads play for lower-priced products. That could open doors to expand adoption of new types of devices."

Seeing ads on a screensaver or on the home screen is fine, as long as the ads don't invade the digital book themselves, writes MG Siegler at TechCrunch.

"When I first read the new that Amazon would begin selling an ad-supported Kindle, my heart sank. This is the beginning of the end, I thought," he writes.

He says the price drop needs to be bigger, though.

"I would bet that many people would gladly accept a Kindle with get this -- two ads -- running simultaneously on the home screen if it meant a $99 Kindle."

Many users of an Amazon message board are upset about the idea of ads on the device they use to read.

"No other electronic device I own comes with ads. If it's not a book I don't want to see it on the screen, Amazon," says one commenter.

Others take a more tempered view:

"If you think about it, a lot of books (paperbacks at least) already come with advertising at the end of the book for other books. If the ad was at the end of the book then I wouldn't really care. If it were injected into the middle of the book, I would care a great deal since that would be extremely annoying," wrote another commenter on the message board.

What do you think? Let us know in the comments section.