Readers: Adver-Kindle should be free 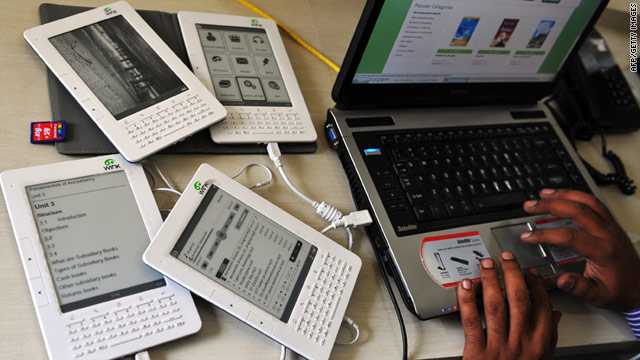 A new version of the Amazon Kindle will be $25 cheaper, but also will include ads.
STORY HIGHLIGHTS
RELATED TOPICS

(CNN) -- We wrote a story on Tuesday about a new version of the Kindle that will be $25 cheaper because it's supported by ads.

The advertisements appear as screensavers and banners at the bottom of the home screen on the ad-supported e-reader.

Your reaction: No way is $25 a big enough discount to put up with a constant barrage of ads that are tied directly to the gadget, which we're dubbing the "adver-Kindle."

That's a generalization, of course. But several of you wrote in the comments section of that story that you think Amazon should give ad-supported devices away for free -- or stop promoting this business model completely.

"I'd rather pay a little more for the device than to have to pay for something that will be running ads," wrote one commenter, named Reader123. "Want me to read ads, then give it to me for free. Otherwise I'll make a point to NOT buy the annoyingly advertised item or service. That's how much I hate ads."

miklrotn wrote that the ad-supported Kindle "should bomb."

"The ad industry sees us as a mass of gullible children who love commercial molestation. I love my TV remote. It helps me escape ads. I pay extra for phone apps to avoid ads. I might accept a free (not cheaper) Kindle in exchange for ads on the screen saver, but not where I have to see them when reading."

BillCousert said Amazon should take a tip from mobile phone makers, which subsidize the price of their hardware by tying the purchase to a service contract.

"$25 is NOT enough. Why not make it free with a commitment to purchase $x worth of material in a two year period? Cell phone companies have been doing this for years," that user wrote.

Others worried about hardware-based ads -- as opposed to those attached to media -- creeping into phones and other gadgets.

Breedstrange: "I'm waiting for this to become the norm :-) They'll start advertising new gadgets as $99.99, but when you get to the store you find out the non-ad supported version is $150.... and they're out of stock!"

Or, as snobird30 writes, perhaps we should blame ourselves:

"If advertising didn't work, companies would stop paying for it. The American Sheeple have brought all of this on yourselves by buying all of the crap you see advertised everywhere," that user wrote.

Still others were more nonchalant:

AngryDeuce: "Can't wait to jailbreak it. I assure you, the hackers of the world WILL find a way :)"

And, finally, there were a few supporters of the ad-Kindle in our comments section. SwimLikeaFis noted, importantly, that the ad-supported Kindle is one model of many. The other devices, without ads, are still for sale.

"Amazon is offering a choice here, which is innovative and perfectly acceptable," that user wrote. "I find annoying and naive all these comments about how a Kindle with ads should be free or significantly discounted. What do you know about Amazon's costs and usage rates? The Kindle is a fantastic reading device and this latest move proves they are constantly thinking of new ways to create a win-win-win for readers, authors and Amazon."

We'll leave it at that. Still have more to say? The comments section is open for business at the bottom of this page.