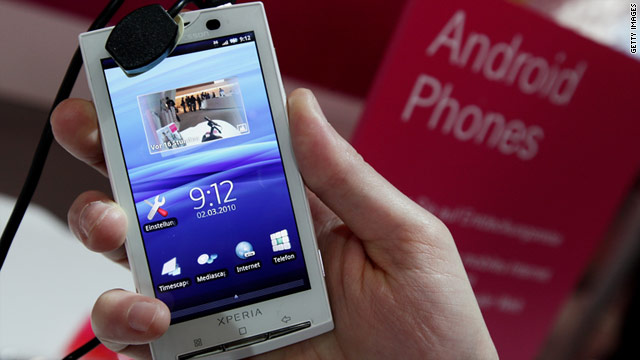 An Army phone, beefier than this Android model, could help soldiers fine-tune targeting for missiles and other munitions.
STORY HIGHLIGHTS
RELATED TOPICS

(CNN) -- I was recently in Fort Knox, Kentucky, to visit my nephew in Army Basic Training, where my sister gave him a basic Tracphone so he could call home more easily.

But he might soon be getting a substantial upgrade: The U.S. Army announced that it has chosen the Android operating system to power its first smartphone.

This news comes just about when (according to the timeline set forth by Sarah Connor in "The Terminator" franchise) the world-dominating, human-exterminating computer network Skynet becomes self aware.

I'm sure that's just a coincidence.

This platform will allow soldiers to quickly and (hopefully) securely share geotagged notes about obstacles they encounter on the ground. It will also support mapping, critical messaging and other support functions.

The Army announcement explained that the JBC-P Handheld is an "Android-based smartphone framework and suite of applications for tactical operations. ... Applications will be secure and interoperable with existing mission command systems so information flows seamlessly across all echelons of the force."

Third-party developers will be building apps and services for this Army smartphone. In July, the Army will release a development kit for the platform.

The Army wants applications that share data and resources across the platform, to avoid the "stovepiping" problems that have plagued so many military and government information technology projects.

Systems integration is key: It could allow soldiers on the ground to fine-tune targeting for missiles and other munitions, as well as request specific aerial drone or satellite reconnaissance. It might also borrow from supply-chain software to manage requests for equipment and supplies. And it could support or enhance field medical treatment, as well as all kinds of in-field training.

Rather than sign up for thousands of pricey two-year wireless carrier contracts, the JBC-P Handhelds will communicate over several existing military radio networks.

When connected to the radio, the prototype device weighs about 2 pounds. That's considerably heavier than the current heftiest smartphone, the HTC ThunderBolt (6.23 ounces). Still, Wired notes that it's "way lighter than the Nett Warrior suite of sensors, computers, radios and mapping functions -- the Army's program of record for doing much of what a smartphone already does."

Battery technology and power management have been big problems for commercial smartphones. Bright displays (often necessary in full daylight) and GPS are notorious energy vampires that leave many smartphone owners hunting for outlets on a daily basis.

In the field, military smartphones would require far more power than commercial models, and they'd have to operate for much longer periods. It'll be interesting to see what battery and charging options (including possibly solar and hand-crank) are supplied with these new Army phones.

Also, military smartphones must be far more rugged than commercial models, able to withstand sand, dust, water, temperature extremes, impact, concussion and more. Microphones that don't get destroyed by loud blasts will be crucial, as will noise filtering for incoming and outgoing audio (something most commercial smartphones generally do poorly).

The Army did not specify whether the phones will come with unlimited text messaging. I hope a remote wipe service comes standard.