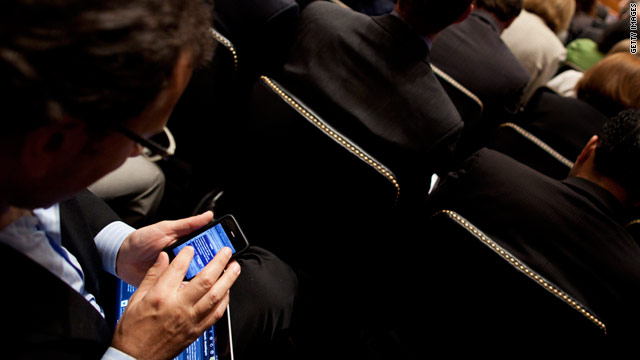 A man checks what appears to be an iPhone while attending a Senate privacy hearing with Apple and Google executives.
STORY HIGHLIGHTS
RELATED TOPICS

(CNN) -- Maybe the hotly anticipated iPhone 5 won't be an iPhone 5 at all.

The emerging theory, based on reports from industry analysts, is that the next model of Apple's smartphone will be called the iPhone 4S and be an update of the current model, not a radical advance.

Multiple sites this weekend were citing a report by Peter Misek, an analyst with Jefferies & Co.

"According to our industry checks, the device should be called iPhone 4S and include minor cosmetic changes, better cameras, A5 dual-core processor, and HSPA+ support," Misek wrote in a report Friday.

Other analysts have offered similar predictions.

But Misek also wrote that Sprint, T-Mobile and China Mobile will be added as iPhone carriers, citing more "industry checks."

The term "HSPA+ is a reference to high-speed processing. The phone reportedly will not utilize long-term evolution (LTE) technology, which is frequently marketed as 4G coverage.

Apple's Worldwide Developers Conference begins June 6. That's been used as Apple's launching pad for the latest iPhone the past few years, but Apple has suggested the event will focus almost exclusively on software this year.

The tech-community's hunch is that a new iPhone will be unveiled in the fall and rolled out in time for the holidays.