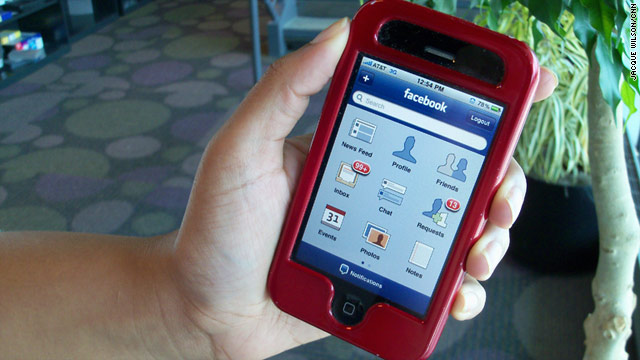 A social media researcher has found that one-third of all Facebook posts are made from mobile devices.
STORY HIGHLIGHTS
RELATED TOPICS

(CNN) -- Using social media is one of the most popular things people do on their phones -- and not just on smartphones.

A new analysis indicates that more mobile Facebook users are posting by using the mobile site m.Facebook.com (a service that's friendly to Web-enabled feature phones, the next step down from smartphones) than all of Facebook's smartphone and tablet apps combined.

Social media researcher Dan Zarella recently posted the results of his analysis of a random sample of more than 70,000 Facebook public posts (status updates, videos, links and photos) made by Facebook users who have open privacy settings.

He found that one-third of all posts were made from mobile devices -- and about 19% were made via m.Facebook.com.

Facebook's Android, iPhone and Blackberry apps are the next most popular mobile posting tools, supplying slightly more than 4% of posts each, for a total of about 13% of all posts.

Although some commenters to Zarella's post voiced disbelief about these findings, it's not too surprising.

According to comScore, as of March, nearly 70% of all mobile handsets in use in the U.S. were feature phones.

Most feature phones are capable of browsing the Web -- although they usually have limited browsers and slow data connections that make this experience challenging. Still, many feature phone users do use their Web browsers regularly, especially for popular sites that are optimized for simpler browsers.

Also, feature phone Web use may rise sharply over the next year as Opera Mini becomes the default Web browser for new feature phones powered by Qualcomm's BrewMP platform, used by about 90 million handsets worldwide.

In April, Facebook announced an upgrade to m.facebook.com, designed to integrate the full range of features found in Facebook's other mobile site (touch.facebook.com) optimized for phones with touchscreen browsers. This move was part of Facebook's strategy to streamline its mobile development efforts to create "one mobile site to rule them all."

Rather than wait for everyone to get smartphones (or to ignore most of the mobile market), Facebook is moving to deliver a good baseline experience to the mobile devices that most people already have in their hands. Given Facebook's enormous user base, this could spur demand for mobile Web services that play nice with feature phones.

Zarella's analysis may be showing the fruits of Facebook's feature phone-friendly mobile strategy.

This analysis isn't the whole picture, of course. It doesn't indicate whether Facebook users who control their privacy settings more tightly have different preferences for mobile tools.

It also doesn't indicate how often people check Facebook from their mobile devices (as opposed to posting updates), or how often they "like" or comment via mobile.

According to Facebook, half of the company's 500 million active users access Facebook via mobile devices. Also, "people that use Facebook on their mobile devices are twice as active on Facebook than non-mobile users." So it makes sense that Facebook would pursue the largest possible mobile market -- which means not overlooking feature phones.