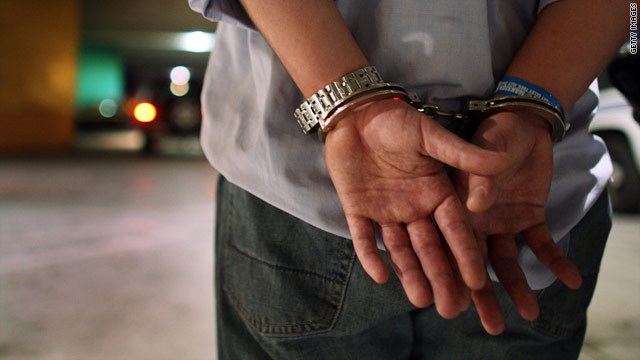 Around the U.S., some state and local police officers are taking the initiative to search arrestees' cell phones without warrants.
STORY HIGHLIGHTS
RELATED TOPICS

(CNN) -- Think about all the data -- photos, videos, text messages, calendar items, apps, call log, voice mail, and e-mail -- on your cell phone right now. If you're arrested, could the police search your cell phone? And would they need a warrant?

That depends on which state you're in.

In California, it is legal for police to search an arrestee's cell phone without a warrant -- ever since a January decision by the California Supreme Court.

California civil rights advocates are pushing back. The Electronic Frontier Foundation is supporting California Assembly Bill SB 914, which would require police in that state to get a warrant before searching an arrestee's cell phone.

EFF also recently filed an amicus brief in the Oregon case of James Tyler Nix, a criminal suspect who was arrested and placed in a holding cell.

According to EFF, "Forty minutes after the arrest, without a warrant, an investigator fished through the suspect's cell phone looking for evidence related to his alleged crime. Law enforcement officials claim they didn't need a warrant because the search was 'incident to arrest' -- an exception to the warrant requirement intended to allow officers to perform a search for weapons or to prevent evidence from being destroyed in exigent circumstances."

EFF senior staff attorney Marcia Hofmann contended: "This is an empty excuse from the police -- the suspect was in custody and unable to destroy evidence on his cell phone."

Meanwhile, in Florida, an appellate court decision upheld warrantless cell phone searches, defining the phone as a kind of "container." This case may be considered by the Florida Supreme Court.

A similar Georgia appellate court decision upheld a warrantless search of a cell phone found in an arrestee's car (not on her person).

The Michigan State Police (MSP) use data extraction devices to pull data off arrestee's smartphones. This is done only with a warrant, according to a state police press release.

But when the Michigan chapter of the American Civil Liberties Union filed a Freedom of Information Act request to obtain details about how these devices are being used, they encountered serious obstacles.

"MSP claimed that the cost of retrieving and assembling the documents that disclose how five of the devices are being used is $544,680. The ACLU was then asked to pay a $272,340 deposit before the organization could receive a single document," said a Michigan ACLU statement.

"In order to reduce the cost, the ACLU of Michigan narrowed the scope of its request. However, each time the ACLU submitted more narrow requests, MSP claimed that no documents exist for that time period and then it refused to reveal when the devices were used so a proper request could be made."

The pattern appears to be that around the U.S., some state and local police officers are taking the initiative to search arrestees' cell phones. In some cases this yields information relevant to the alleged crime, which has contributed to indictments and convictions.

Only then do some of these cases wind up in appellate or state supreme courts in a process that often takes years.

If you're concerned about police or anyone else getting into your cell phone, a basic precaution is to configure your phone's security settings to always require a passcode or pattern to access any of the phone's data or functions.

According to Catherine Crump of the American Civil Liberties Union, "The police can ask you to unlock the phone -- which many people will do -- but they almost certainly cannot compel you to unlock your phone without the involvement of a judge."

Data extraction devices used for cell phone forensics can bypass passcode security in some cases, but so far there appears to be little evidence that police are using these devices without warrants.