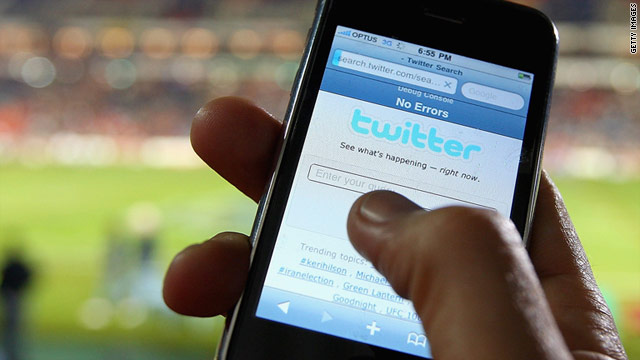 (CNN) -- Among U.S. adults who go online, 13% use Twitter -- and more than half (54%) of these people access the popular social media service with their mobile phone, according to new research from the Pew Internet and American Life Project.

The report also revealed some interesting details about the demographics of Twitter users. For instance, 25% of adult African-Americans who use the Internet are on Twitter, as are 19% of Hispanic Americans, compared with only 9% of whites.

Where you live also may affect whether you're on Twitter: About 15% of both urban and suburban U.S. adult Internet users are on Twitter, vs. only 7% of rural dwellers.

Twitter is slightly more popular with men than women, and most popular with Internet users ages 18 to 29. Income is not an especially significant indicator of whether someone is likely to use Twitter, but education is: 16% of college-educated adult Internet users are on Twitter, vs. only 8% of those who stopped school after graduating high school.

Pew did not examine which types of phones mobile tweeters use, but it's probably all of them. After all, Twitter was designed from the very beginning to be accessible on even the simplest feature phones (the next step down from smartphones, representing 70% of the handsets currently in use in the U.S.).

This is evidenced by the most obvious characteristic of Twitter -- that tweets are limited to 140 characters. That comes from the constraints of SMS text messaging, which can be done from virtually every cell phone on the planet. Texting is, by most measures, the most popular activity across nearly all mobile demographics and on all types of mobile phones.

Twitter also supports optional e-mail notifications, and e-mail is increasingly popular with mobile users on all kinds of phones.

On the higher end of mobile, you can access Twitter from a variety of native mobile apps for smartphones and tablets, created by lots of different developers using Twitter's application programming interface, or API.

Twitter also recently updated its mobile website by leveraging new HTML5 capabilities to add interactive features and make the site function more like an app -- at least on smartphones with full-featured browsers. But even on the limited "microbrowsers" still common on most feature phones, Twitter's site offers a fairly user-friendly mobile Web experience.

On the flip side, all this research indicates that if you're using social media, expect that a significant and growing proportion of your audience are on mobile devices. Increasingly, social media will also mean mobile by default.