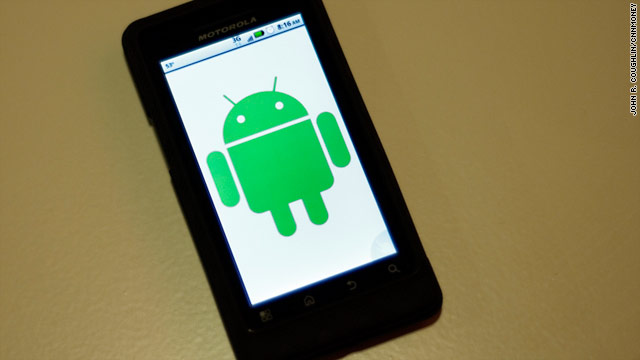 (CNN) -- The days of unlimited mobile data plans are waning, as Verizon follows AT&T in reportedly moving toward tiered plans that charge users based on how much data they use.

So if new research from Nielsen is correct, Android users might eventually encounter some bill shock.

Nielsen analyzed nearly 65,000 U.S. cell phone bills from the first quarter of 2011 and found that "Android smartphone owners consumed an average of 582 MB of data each month, compared to 492 MB for iPhone owners."

Right now, since 4G networks and handsets are not widely deployed in the United States, these figures mainly represent data usage on 3G networks. As 4G becomes the norm for mobile broadband, average data usage will likely rise sharply.

Even though more iPhone users engage in common data-dependent mobile activities such as downloading apps, streaming audio, or watching video, Android users still consume more data on average, says Nielsen. This also breaks with the conventional wisdom that iPhone owners are the "data hogs" of the smartphone world.

It's worth noting that even 582 MB of data per month is far below the limit for the first tier of AT&T's current data plan (2 GB) -- and to be competitive, Verizon's tiered plans (when announced) will probably be priced similarly to AT&T's. So at least for the near future, data overage charges will probably be rare for most mobile users on tiered plans.

But Verizon did recently reveal, according to reports on tech blogs, that customers who exceed their data limits will be hit with overage charges, rather than have their data use capped or throttled.

According to Nielsen, Research in Motion (which manufactures BlackBerry phones) had the lowest average data usage -- just 127 MB per month.

However, RIM compresses data before it's sent to a BlackBerry, in order to improve data efficiency. RIM is specifically touting this as a way to help its users stay within their budgets.

Ultimately, whether your smartphone is a data hog -- or how much your data plan will end up costing you each month -- is not merely a matter of which mobile platform you're on.

It also depends on the hardware power requirements of your handset, how your wireless carrier manages data transmission, and whether your phone can be set to automatically "prefer" a Wi-Fi connection over data whenever a trusted Wi-Fi network is available.

A recent Brighthand forum thread offers a good discussion of many of the variables to consider.

So: Just as it's a good idea to know how much you weigh, it's also a good idea to monitor your mobile data usage. Mobile carriers typically offer app or Web access to your account information, including your data usage.

They may or may not plot this on a chart for you over time -- but glancing at this number occasionally will keep you aware of what your normal data usage is, and when that shifts.

Over time, this habit can help you choose the best devices, carriers, and plans for your budget and needs.