Mobile devices save lives in emergencies 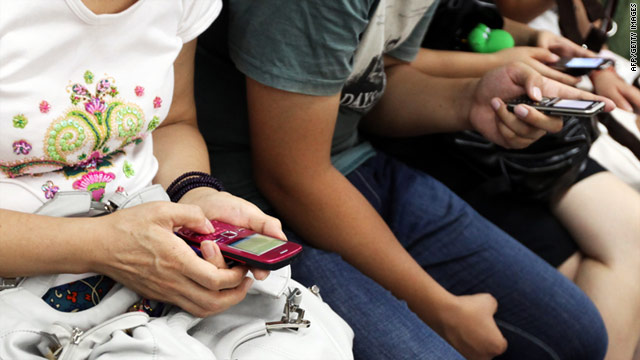 (CNN) -- From tornadoes to terrorist attacks, when an emergency strikes, people in the affected area start posting about it on social media, especially from their mobile phones.

Increasingly, emergency response officials monitor these posts to enhance their understanding of the unfolding situation -- and this information can prove very useful when deciding where to deploy response or relief efforts.

At a recent conference, Russ Johnson, director for public safety and homeland security for ESRI (a leading vendor of geographic information systems, or GIS), explained how mobile social media is changing the way emergency response and recovery works.

For instance, in the aftermath of an earthquake, "there are usually people in the affected region, including the general public, tweeting or posting to other services," said Johnson. "And for really big emergencies that go on for a while, often someone sets up a crowdsourced map with Ushahidi."

"Field commanders might look at that real-time information and realize that their model of the situation is off. So they might decide: Let's divert a team to this location over here."

The beauty of social media, said Johnson, is that it "multiplies your ability to have sensors on ground to gather information."

However, in an emergency, not all tweets are equally useful. One of the difficulties with putting social-media posts from the public to use in emergencies is that this information is free form and often incomplete. For instance, someone might tweet, "Power lines down," but neglect to specify the location.

The public can use social media to aid emergency response. "If they can provide actual information, not just interesting communication, that's most helpful."

Power and data connections often go down during emergencies, and voice calls (including 911 calls) might not go through, but cell networks often can still carry some SMS text messaging traffic.

If you use Twitter, you can set up your phone to tweet via SMS. Then -- if you can do so without endangering yourself or others -- you can try posting useful information about what's happening around you in the wake of an emergency.

Don't try to capture every detail -- that runs down your phone battery, and there probably are more important things to do than stand around tweeting. But for crucial intelligence, a few key tweets can alert authorities and perhaps summon aid.

What to tweet in the immediate aftermath of an emergency?

Keep your messages short, clear, and specific. Use keywords that you think emergency responders would search for. Location information (especially town names and roads or intersections) is especially useful.

If you know the Twitter IDs of local emergency response agencies, news outlets, or other relevant people or organizations, include them as "@ replies" in your tweets to get their attention. They might retweet or otherwise pass along your messages to officials.

"With the Japan earthquake and tsunami, most communications were out, but text messages were mostly still getting through," Johnson noted. "We were able to figure out from those references where primary power outages were. Then we used GIS technology to turn that information into a 'hot spot' for emergency response."

The emergency response community is developing tools to better filter social media during emergencies. "It's a real challenge, trying to take unauthoritative information and make it trustworthy, reliable, and actionable," Johnson said.

After a disaster, one of the biggest jobs is damage assessment. Usually this is done with paper forms filled out in the field, or maybe on a basic tablet or PDA. That takes time to get the information back where it's needed.

But, said Johnson, "Imagine you're a walking through a town the day after a big tornado hit, and the street signs and landmarks are all gone. You don't know where you are, but your smartphone has a GPS, it can tell you the address where you are. Then an app can pop up a form, and the location is already filled out. There are pick lists that you can quickly choose from -- say, to describe damage as destroyed, moderately, or lightly damaged. You can take a photo. And you can send information back right away. And 50 other people are doing the same thing. Anyone can do that, you can easily train volunteers to do that."

And if there's no access to the wireless network, the phone or tablet will store the data and transmit it when the connection is restored.

Using similar tools, responders and workers can also report back on problems that have been fixed -- such as downed power lines removed, fires extinguished, supplies delivered, or people rescued.

These kind of tools have altered the "map latency" that plagues recovery efforts. "The standard had been that at the incident command post you update your operational map about every 12 hours. With these kinds of tools, you're updating your map about every hour. That can make a huge difference, save a lot of lives, and help keep people out of harm's way."

Of course, not all emergencies are large disasters. Every day in every community smaller emergencies happen: House fires, car accidents, heart attacks and more. Police, fire, and ambulance personnel also could use more information when they're racing out to the scene -- information that local governments and agencies often already have, but can't easily share.

For instance, Johnson observed that many firefighters get injured or killed by falling through floors. "Just being able to quickly scan a floor plan and see there's a basement could change which way you enter a burning building," he said.

"Agencies have collected data, but it's a one way street, and it doesn't generally get out to first responders. This includes things like facility inspection reports, locations of hazardous materials and utility boxes -- and where the people generally are. Right now, if the first responders have access to that information at all, it's usually back at the station or in a thick three-ring binder. It needs to be easy and fast to access."

In several big cities such as Phoenix and Los Angeles, local governments are taking the lead to get this kind of information to first responders in useful ways. "So far the technology is rudimentary, but you must have this kind of data flow when you have a large amount of critical infrastructure and a complex built environment."

For many city governments and emergency response agencies, the main challenge to effective information-sharing in the field is culture, not technology. And often it's the responders who resist.

"They don't want to be distracted by or overloaded with information. They just want to focus on saving people and putting out fires. So you have to be really careful about what information you serve them, and how they interact with it," said Johnson. "But once they see what this information can do, they usually want it."