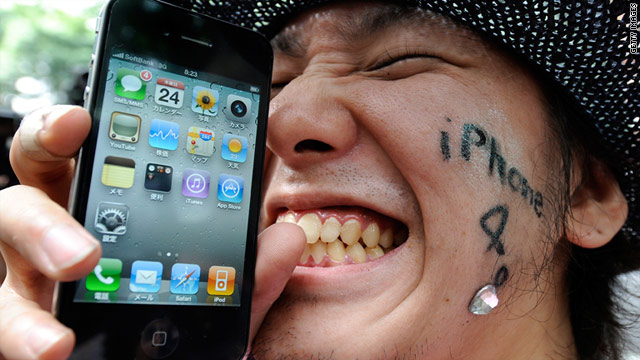 An Apple fan holds his new iPhone 4 phone with glee on the day of its release in June 2010.
STORY HIGHLIGHTS
RELATED TOPICS

(WIRED) -- It's a testament to your brand name and image when a plurality of consumers are willing to buy your product without even trying it... or even seeing it with their own eyes.

A recent survey of close to 3,000 people found that 35% were willing to purchase Apple's next-gen iPhone when it hits the market.

"Our survey data confirms the strong following Apple has built around its iPhone, with more than one-third of consumers planning to upgrade to the latest model only a little over a year following the release of the iPhone 4," said PriceGrabber general manager Graham Jones, in a press release.

Apple has nearly always had a cult following of loyal users, but in recent years, particularly since the release of the first iPhone, that devotion has spread. Not all may consider themselves "fanboys," though (and in fact, many will vehemently deny it).

The company's media events are heavily anticipated and product releases are swathed in rumor.

Almost 2 million iPhone 4 devices were sold its opening weekend, and when it hit Verizon, sales records broke in a mere two hours. With such a popular brand, and such a successful line of smartphones, it's not surprising that people can't wait to get their hands on an iPhone 5 -- even if they don't know what it looks like yet.

So what makes Apple such a desirable phone manufacturer that consumers are willing to bet on it, sight unseen?

One factor: Apple's well-curated, well-populated App Store presents consumers with a wide variety of quality apps to choose from. Other app stores still just don't stack up, either suffering from a lack of content, a lack of profit (for developers), the presence of malware, or sudden app removals.

If you've got a problem with an Apple product, Apple's brick-and-mortar stores offer a convenient, reliable way to get help or get a fix. Apple even has an app for its App Store, so you can easily schedule appointments if, for instance, your iPhone's home button suddenly quits functioning.

If you're planning on giving a phone as a gift, according to the PriceGrabber survey, you can't go wrong with Apple: 69% of respondents said they would prefer receiving an iPhone 5 as a gift over other upcoming smartphone models such as the Droid Bionic, Galaxy S II, or BlackBerry Curve.

With all this hype and anticipation, I would not be surprised if iPhone 5 sales end up blowing past sales records out of the water.