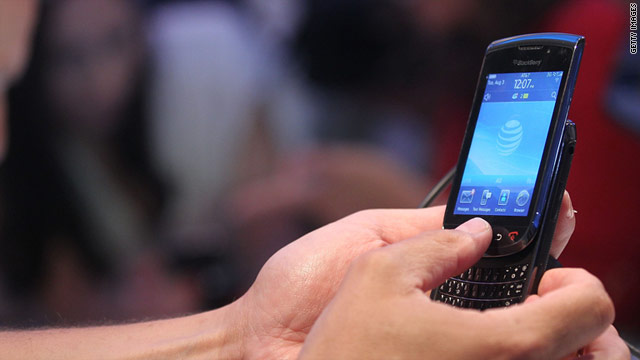 (CNN) -- If you're a longtime AT&T iPhone user whose unlimited data plan was grandfathered in when AT&T stopped offering unlimited plans last year, a brand new twist on your plan might seem like a pretty significant limitation after all.

On Friday AT&T announced that, starting October 1, it will begin throttling data delivery speeds to the "top 5%" of heaviest data users." This means their experience of the mobile Internet over AT&T's network will slow to a crawl.

According to AT&T, this measure is a "step to manage exploding demand for mobile data," because "many experts agree the country is facing a serious wireless spectrum crunch."

AT&T says the throttling will only be temporary; full speed will be restored to throttled customers at the start of the each billing cycle.

In the meantime, throttled users can technically still move as much data as they want across the carrier's network -- just at very slow speeds, a process that most smartphone users would probably find unacceptable.

AT&T says it will provide some warning prior to throttling: "Before you are affected, we will provide multiple notices, including a grace period."

But where exactly is the line that, when crossed, might put an AT&T "unlimited" customer at risk of throttling?

AT&T is being very slippery on this key point.

According to AT&T, "To rank among the top 5%, you have to use an extraordinary amount of data in a single billing period. ...Typically what puts someone in the top 5% is streaming very large amounts of video and music daily over the wireless network, not Wi-Fi. Streaming video apps, remote web camera apps, sending large data files (like video) and some online gaming are examples of applications that can use data quickly. Using Wi-Fi doesn't create wireless network congestion or count toward your wireless data usage."

What about the other major carriers?

Both carriers' policies claim to affect only the top 5% of data users. However, Verizon's approach is more draconian: Verizon will throttle a customer's data speed not just for the current billing cycle, but for the following month, too.

T-Mobile still sells unlimited data plans, but in October 2010 T-Mobile informed its customers that it would be throttling speeds for customers who use more than 5 GB of data per month -- halving the carrier's previous threshold.

As of April, Sprint claimed to be "the only national wireless carrier offering unlimited pricing plans without data overages or throttling." However, this month AllThingsD reports that Sprint will use its prepaid Virgin Mobile brand to test data speed throttling for customers using more than 2.5 GB of data in a month. Despite that Sprint also recently launched an ad campaign ridiculing its competitors for throttling data speeds.

Data throttling is nothing new, and it's not even sinister. As I wrote last year it's long been a way for data network operators to manage their resources, so average speeds for average users don't get compromised by a few extreme "data hogs."

But for a throttling policy to be fair, it must be transparent. Without transparency, there's no accountability -- and thus no way to know whether AT&T and Verizon are enforcing their throttling policies fairly.

Under the current scenario, they could even go beyond that "top 5%" in order to manage their networks. And probably no one would ever know.

Both T-Mobile and Sprint (through its Virgin Mobile brand) specify their throttling thresholds. This means their customers can more easily monitor and pace their data usage to avoid throttling.

AT&T and Verizon (the two 800-lb gorillas in America's emerging wireless duopoly) offer no such transparency. In order for their top 5% benchmark to be meaningful and transparent, customers must know how these carriers are gauging usage.

I asked AT&T spokesman Mark Siegel to clarify how AT&T will identify its top 5% for data throttling. He referred only to AT&T's posted announcement (which did not clarify this important point) and added: "We're not offering details beyond what's in the statement." Another AT&T spokesman, Seth Bloom, also demurred on clarifying this point.

I asked Verizon spokeswoman Debra Lewis how Verizon makes its top 5% determination. She replied, "We don't have any kind of data caps. We reserve the right to slow data speeds in very specific circumstances on unlimited data plans."

Lewis noted that Verizon is not currently throttling customers for management, but (like AT&T) she declined when asked repeatedly to explain exactly how Verizon would determine which customers to throttle, should such measures become necessary.

In a recent podcast, Engadget.com editor Myriam Joire said that this lack of transparency puts wireless customers at a considerable and unfair disadvantage.

"The problem is not the throttling, it's the way [AT&T and Verizon] are doing it," she said in an interview. "They're setting it up so we have no transparency and they have no accountability. Adding insult to injury, AT&T is doing this to the people who they grandfathered in to unlimited plans when they introduced tiers last year. AT&T is basically going back on its word and screwing its most loyal customers."

From my own perspective, I'd argue that data speed throttling is such a substantial impingement on wireless service that it renders the concept of an "unlimited data plan" meaningless.

For the sake of fairness, transparency and accountability, AT&T and Verizon might want to consider simply naming a high (but specific) data cap for their formerly "unlimited" plans, and then offer to switch users who approach those caps to their most appropriate equivalent tiered plan. That way, no one gets an unpleasant shock when "network management" eventually has to happen.

It's no surprise to anyone -- especially wireless carriers who aggressively market data-intensive services like streaming media -- that demand for wireless data has exploded. At the same time, carrier rollouts of faster so-called "4G" networks is proceeding unevenly. Also, most cell phones in people's hands and available for sale (including the iPhone 4) are not yet compatible with those new networks.

These factors will change over time. But for now and the next few years, a "spectrum crunch" is indeed likely. Carriers will have to cope with this situation, probably through throttling.

Within this context, unlimited data plans obviously were an unrealistic promise from the very beginning. It was a mistake for wireless carriers to offer them at all. It's an even bigger mistake to perform verbal gymnastics that leave their most dedicated customers in the dark, and at risk, simply in order to perpetuate the "unlimited plan" fallacy.