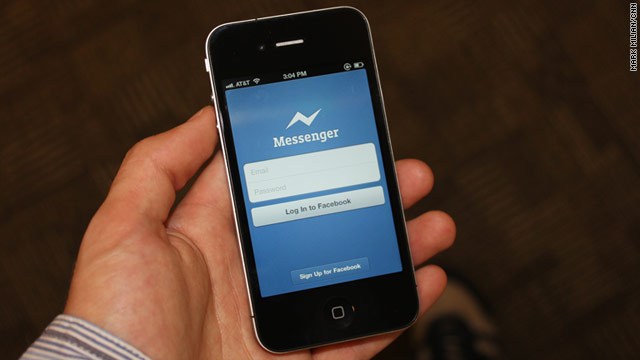 (CNN) -- Smartphone owners may have to ask themselves: why text when there's Facebook Messenger?

That's a question the cellular carriers will lament as the biggest technology players pile into what's known as the mobile-messaging space.

Facebook joined the fray on Tuesday with the release of Messenger for iPhone and Android.

Facebook's Messages feature, which allows people to communicate privately with friends on the social network and recently with e-mail acquaintances, is already built into the Facebook apps. However, the new standalone Messenger software is a cornerstone for Facebook's ambition to become the communications hub on phones, Facebook employees working on the messaging product have said in interviews.

To design the app, Facebook acquired the development team that built a program called Beluga. It allows users to include photos and location coordinates with each message and can also send text messages to phone numbers, much like the new Facebook app.

Andrew Bosworth, a Facebook product director, discussed the potential need for a dedicated client in an March interview, days after the Beluga engineers started at the Palo Alto, California, company.

"One click from the home screen is a valuable trait," he said, contrasted with the need to open the full Facebook app in order seek new messages. "They've built specifically for mobile-to-mobile. Our messages stuff was built for a convergence between mobile and Web and e-mail and a bunch of other things."

Bosworth suggested that a standalone messenger was "the next step" in Facebook's plans. As it turns out, it was.

But cell operators, which derive substantial profits from texting plans and per-message fees, stand in the way, Bosworth said. How they manage their SMS networks is viewed by tech visionaries as controlled, stifling. (SMS stands for Short Messaging Service, another name for texting.)

Facebook is made up of people who breathe the hacker ethos. Earlier this summer, for example, Facebook hired George Hotz, aka GeoHot, who hacked iPhone and PlayStation 3 software. Networks should be malleable, these people often say.

"SMS to SMS: those are controlled by the carriers," Bosworth said during the interview from March. "That's a closed loop."

Apple, whose founders famously built "blue box" equipment decades ago for enabling free phone calls, much to the chagrin of telecom firms, apparently buy into this thinking as well. This fall, Apple will bundle a mobile app called iMessage into iPhone, iPod Touch and iPad, which can bypass cell carrier infrastructure granting free text messages to other users of Apple devices.

Similarly, Research in Motion has BlackBerry Messenger. And Google provides two services: Huddles, which is part of the Google+ social network, and Google Voice.

A dedicated app can be deployed on, say, your mother's smartphone in order to ween her off of AT&T's or Verizon Wireless' texting services and into a free communication network that uses minute amounts of data.

"To people, it's a bridge -- like, 'Oh, I already know how this works. This is great,'" Bosworth said. These types of apps "are taking SMS and moving it away from that closed-loop thing and into another space," he added.

"This is an area that's very exciting and hot and interesting," Bosworth said. "I don't think anyone has the answer yet. I think Facebook Messages is the very likely substrate upon which these things end up operating."

An AT&T spokesman declined to comment. Verizon has said it intends to eventually move all of its services onto its next-generation 4G LTE data network. The company hasn't said how it would price the different features.

Software alternatives to texting could pose a threat to existing money makers, but carriers must find or create other worthwhile channels to charge for, Verizon Wireless marketing chief Marni Walden said in an interview in January.

"We'll always be in a place where we have to evolve how we generate revenue for the business," Walden said. "But we're not going to run away from the innovation that's happening out there. We're going to make sure we innovate it better, or integrate it better on our devices than anyone else, as opposed to putting up a walled garden."