Tablet computers: Fun in the bathroom? 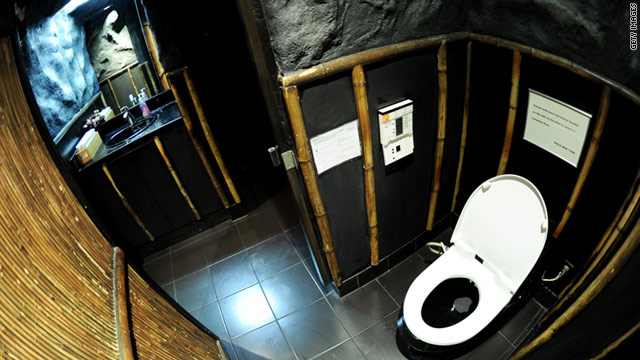 This restroom at restaurant Ninja New York features an electronic control panel. For everyone else, there are tablet computers.
STORY HIGHLIGHTS
RELATED TOPICS

(CNN) -- If you're ashamed to admit you can't resist checking e-mail, catching up on your Web comics or flinging a few "Angry Birds" when nature calls, take heart. You're not alone.

More than one out of three respondents to a recent, unscientific survey admitted to using their tablet computers while in the bathroom.

The survey by office-supply seller Staples Inc. asked 200 tablet-using professionals about their preferences and habits.

There were several interesting findings. Among them, that the simple ability to store and carry around a tablet easily was a top selling point for more than 90% of people who bought them.

But the factoid that seemed to catch everyone's attention Tuesday was that more than one-in-three respondents -- 35% -- fessed up to using their iPad, Motorola Xoom, Samsung Galaxy or other tablets while in the bathroom.

"Being able to tuck a tablet into a portfolio or small bag was more important than the ability to video conference, the device's operating system or easy access to office e-mail and VPN," the company said in a report on the survey released Tuesday.

The survey was designed, at least in part, to gain insight into how professionals are using tablet computers, which are largely marketed as gaming, reading and recreational gadgets.

The answer? At least 80% of respondents said they "enjoy a better work-life balance" because of their iPad or other tablet. Sixty percent said they get more work done because of their tablet and more than 40% said staying in touch with co-workers and clients was a main reason for buying one.

Which is all well and good. But who could resist pointing out the glimpse into the rarely acknowledged truth that a trip to the water closet has long been an excuse to catch up on reading or other activities. (This doesn't mean we're letting you off the hook, Bathroom Stall Texter/Talker).

And, that being the case, the odds were low that everybody was going to avoid potty humor.

We're warmheartedly calling out Brad Reed of IT site Network World for this groaner of an intro:

"With the market flush with hot-selling tablet computers, it shouldn't bowl anyone over to learn that many users are taking the plunge and bringing their devices to the bathroom."

So, who's ready to fess up? Tablets in the bathroom -- guilty as charged or disgusted on principle?