Plate of sushi may be an iPhone 5 spoiler 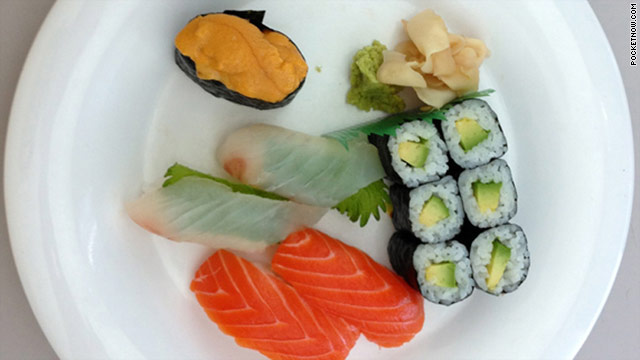 PocketNow discovered this photo, which alleges to be from an iPhone 4 but shows signs of being taken by something else.
STORY HIGHLIGHTS
RELATED TOPICS

(CNN) -- This time, it only took a plate of tasty-looking raw fish to crank up the iPhone rumor machine.

Smartphone news and review blog PocketNow posted a photo late Wednesday night that they say might be one of the first taken with a version of Apple's yet-to-be-released iPhone update.

The photo's embedded info claims that it was taken with an iPhone 4. But the smoking gun, according to the site, is the fact that the photo appears to have been cropped from a size requiring an 8-megapixel camera.

The iPhone 4 has a 5-megapixel camera.

PocketNow doesn't name a source for the photo but, again unattributed, says it "supposedly" came from an Apple employee having lunch at work.

Insert your own bitter "Apple employees get sushi at work" comment here.

Mashable's Ben Parr writes that the photo came from the Flickr account of an Apple employee -- an account that has since been made private -- and that GPS data puts the photo's source at 1 Infinite Loop, the address of Apple's Cupertino, California, headquarters.

Of course, PocketNow, which regularly searches photo sites for evidence of upcoming phones, notes that they've been fooled before. For example, by an iPhone photo that had been uploaded to an iPad, changing its image-file data.

Tech blogs speculate that an iPhone 5, or at least an updated iPhone 4, will be unveiled by Apple some time late this month or in October.

What do you think? Is an 8-megapixel camera a selling point? Do you think the image is real, or a red herring? Does this make you want lunch? Let us know in the comments -- and hopefully this conversation will drown out those of you who always will complain about anything on the subject of Apple.