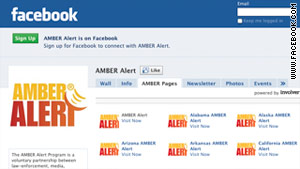 AMBER Alerts have previously been available to many users via their local law enforcement Facebook pages.

But now, Facebook users can receive the announcements directly from state AMBER Alert pages, by choosing which state's alerts they want to see. The District of Columbia and the U.S. Territories also each have an alert page.

"As we all know, social networking has few boundaries, and now AMBER Alerts will benefit from that reach," said Laurie Robinson, the National AMBER Coordinator for the Department of Justice.

The AMBER (America's Missing: Broadcast Emergency Response) Alert system started as an agreement between broadcasters and law enforcement agencies to quickly release information to the public on child abductions so citizens can assist in the search for the child.

It is named for Amber Hagerman, a 9-year-old from Arlington, Texas, who was kidnapped and murdered in 1996. The Facebook announcement comes on the eve of the 15th anniversary of her abduction.

Ernie Allen, president of the National Center for Missing and Exploited Children, said designers of the program wanted to be sensitive to people who would see the alerts as spam, so users must sign up to receive the alerts.

An estimated 800,000 children are reported missing every year. The AMBER Alert program has been credited with the recovery of 525 children since it began.