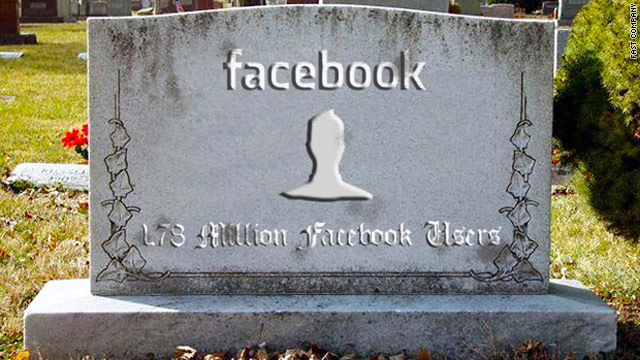 Facebook has defined an "active" user as one who has logged in within the last 30 days.
STORY HIGHLIGHTS
RELATED TOPICS

According to data from digital-legacy planning firm Entrustet, a big portion of these users will soon no longer be considered "active," by any reasonable measure.

The company compared Facebook usership data with average death rates from the Center for Disease Control, and discovered that this year, around 480,000 Facebook users may pass away in the U.S., and 1.78 million worldwide.

These figures are only likely to grow year to year, especially as Facebook expands pass the 600 million user mark.

So many profiles now fall out of the range of an "active" user. Beyond the deceased, there are endless duplicate accounts -- Entrustet found that 150% of 20- to 24-year-olds in the U.S. are on Facebook -- not exactly a plausible tally.

Fast Company: The Facebooks of China

What's more, a recent Gartner report estimated that in the coming years, roughly one in every ten of your friends on Facebook and other social networks will be nonhuman, meaning they'll be "social bots," automated profiles created by brands and organizations to engage consumers.

With profiles of the departed presumably being left untouched, with social bots soon to be plaguing the network, and with duplicate accounts running amok, how can Facebook ever provide an accurate "active" usership count?

For the deceased, Facebook has created a system of "memorializing" accounts, which adjusts a profile's privacy settings to be seen only by confirmed family and friends. Immediate family members may also request the removal of a loved one's account.

But the onus is on the deceased's relatives -- if the "memorializing" feature is not activated, Facebook will continue to assume the profile still represents an active user. The same assumption goes for duplicate accounts as well -- Facebook relies on users to merge accounts and report fake profiles.

To address this issue, Facebook has defined an "active" user as one who has logged in within the last 30 days. Thus, a month after a user passes away, that user is no longer considered "active," appropriately.

For organizations and businesses registered for the social network, Facebook distinguishes their accounts as "profiles" rather than "user pages," and does not count them as active users.

But for duplicate and fake accounts, keeping them accountable is more difficult, as users might be willing to log in to multiple accounts.

So while the company's latest partner Goldman Sachs has been boasting of Facebook's 600 million-plus userbase, it's unclear just how accurate those figures will be if investors -- and advertisers, for that matter -- ever choose to parse the details.