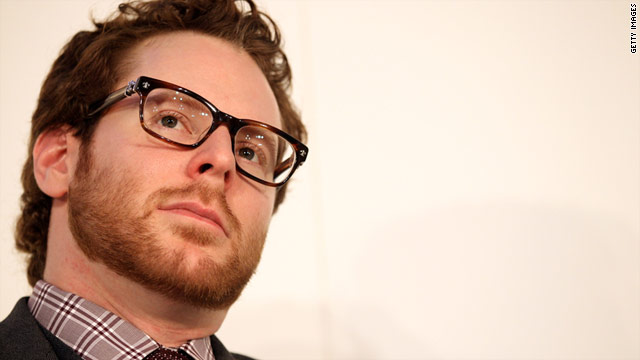 Sean Parker looks on during the DLD Conference 2011 in Munich, which started Sunday.
STORY HIGHLIGHTS

(Mashable) -- Napster co-founder and Facebook founding president Sean Parker lashed out at the movie "The Social Network" at a conference in Europe Sunday, calling it "a complete work of fiction."

As you can see in this video (skip to 5:20), Parker admires the production values of the film, but objects to the way his character was portrayed.

He particularly dislikes the scene where he writes a check to Facebook co-founder Eduardo Saverin:

"The part of the movie that frustrated me is actually the scene at the end where the character played by Justin Timberlake -- who happens to have my name -- basically writes a check to Eduardo -- who I'm also, I consider Eduardo a friend of mine, and I'm one of the few people at Facebook who still interacts with Eduardo -- and throws it in his face and has security escort him out of the building.

"And I mean, that's just rude. This guy in the movie is a morally reprehensible human being."

Parker made the remarks in an on-stage interview at the DLD Conference 2011 in Munich, which started Sunday.

In an interview with Mashable three months ago, Zuckerberg wouldn't say whether he liked the film or not, but thought its audience size was minuscule compared with Facebook's: "We build products that 500 million people see... If 5 million people see a movie, it doesn't really matter that much."