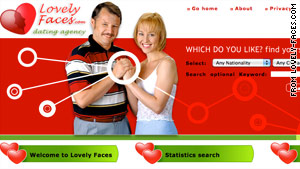 (Wired) -- How does an unknown dating site, with the absurd intention of destroying Facebook, launch with 250,000 member profiles on the first day?

At least, that's the approach taken by two provocateurs who launched Lovely-Faces.com this week, with profiles -- names, locations and photos -- scraped from publicly accessible Facebook pages. The site categorizes these unwitting volunteers into personality types, using a facial recognition algorithm, so you can search for someone in your general area who is "easy going," "smug" or "sly."

Or you can just search on people's real names.

The duo behind the site say it's art, not commerce.

In what seems to be liberal-arts-grad-schoolese, Paolo Cirio, a media artist, and Alessandro Ludovic, media critic and editor-in-chief of Neural magazine, explain why they made the site.

"Facebook, an endlessly cool place for so many people, becomes at the same time a goldmine for identity theft and dating -- unfortunately, without the user's control. But that's the very nature of Facebook and social media in general. If we start to play with the concepts of identity theft and dating, we should be able to unveil how fragile a virtual identity given to a proprietary platform can be."

And the duo speculate that if people pull hard enough on that bothersome thread, Facebook's $50 billion valuation will unravel.

"Scraping people's information violates our terms," said Barry Schnitt, Facebook's director of policy communications. "We have taken, and will continue to take, aggressive legal action against organizations that violate these terms. We're investigating this site and will take appropriate action."

Facebook's terms of service require those who want to collect data from its pages to apply for permission, which Cirio and Ludovic did not do when they pulled down publicly available profile information on a million Facebook users. (They aren't the first to scrape a million Facebook profiles.)

Cirio and Ludovic say they will take down a user's profile, if a person asks, and the site doesn't have any indication they are actually trying to make any money. Instead, it's part of a series of prank sites, the first two of which targeted Google and Amazon, intended to make people think more about data in the age of internet behemoths.

Moreover, it's a bit funny hearing Facebook complain about scraping of personal data that is quasi-public.

Mark Zuckerberg, the company's founder, made his name at Harvard in 2003 by scraping the names and photos of fellow classmates off school servers to feed a system called FaceMash. With the photos, Zuckerberg created a controversial system that pitted one co-ed against another, by allowing others to vote on which one was better looking.

So even if Facebook's anticipated legal nasty gram makes its way to the duo, who seem to be based somewhere in Europe, they'll have an excellent defense.

"I learned it by watching you, Zuck."