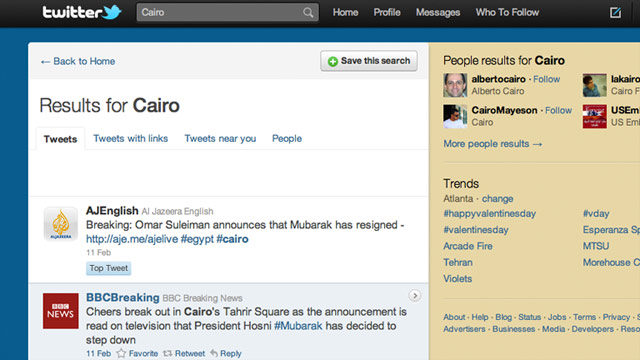 According to a new report by HP, trending topics are not determined by how many followers a user has or how prolific a tweeter that user is.

After studying a sample of 16.32 million tweets during the fall of 2010, researchers discovered that 22 users were the source of most trending topic retweets. (Roughly 31% of tweets about a trending topic are retweets.)

Of these 22 influentials, 72% were Twitter accounts run by traditional news organizations, including Reuters and the Washington Post, but other digital-age media outlets such as the Huffington Post were also featured on the top trenders list.

(While Lady Gaga didn't make the top rankings, what appears to be some knock-off Twitter feed run by "Lady Gonga" did. We snooped around to learn more about @LadyGonga and top result @vovo-panico, but our Portuguese is a bit rough. We reached out to HP to find out why both accounts ranked among some of the world's top news outlets...stay tuned.)

However, the report found that social media is not a replacement for news information.

"Twitter users then seem to be acting more as filter and amplifier of traditional media in most cases," said Bernardo Huberman, HP Senior Fellow and director of HP Labs' Social Computing Research Group.

This is especially true in the wake of the Egyptian unrest, when Twitter hashtags (#Mubarak, etc.) for the protests were constantly trending on Twitter, but filtering users to mainstream media outlets for the most breaking news.

Appropriate for the 140-character format, Twitter trending topics disappear almost as fast as they come, suggesting users are hungry for more news. On average, according to HP's report, 40 minutes is the longest time a topic will stay at the top of Twitter's trends.