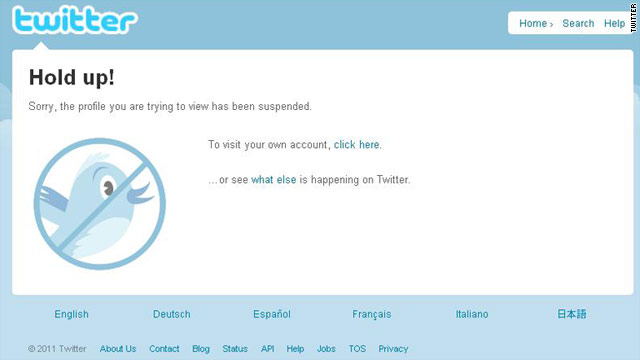 Twitter's guidelines call for parody accounts, like @ceoSteveJobs, to be clearly marked as such.
STORY HIGHLIGHTS
RELATED TOPICS

The account, @ceoSteveJobs, had more than 450,000 followers before, according to its operator, Twitter shut it down. But he was back up and tweeting Wednesday afternoon after changing the account name to @fakeCEOSteve.

The account isn't the only one to mimic Apple's leader, who is currently taking a medical leave of absence. Blogger Fake Steve Jobs, who is actually Newsweek writer Daniel Lyons, has an account with more than 7,400 followers.

Twitter's parody policy states that the micro-blogging site protects its users' free-speech right to create parody accounts, but that they must be clearly marked as such.

"In order to avoid impersonation, an account's profile information should make it clear that the creator of the account is not actually the same person or entity as the subject of the parody/commentary," reads the policy.

Twitter spokeswoman Carolyn Penner said in an e-mail to CNN that the company does not "generally comment on alleged user violations."

"Our rules, guidelines and actions tend to speak for themselves," Penner said.

Apple did not immediately respond Wednesday morning to a message requesting comment for this report.

But at least once, the account has been confused for the real thing -- by England's Daily Mail, which reported a spoof tweet saying the iPhone 4 was going to be recalled.

In an email to CNN, the account's owner, who asked not to be named, said Twitter reactivated the Twitter feed after the name change.

It was just in time to take advantage of Jobs' appearance at the unveiling of the iPad 2 on Wednesday.

"#iPad2 is now 33% thinner and 50% more absorbent," he wrote about the sleeker new gadget.

Earlier Wednesday, an attempt to pull up the account produced a message saying the account had been suspended.

According to TechCrunch, the owner of the account said that Apple had complained about his feed.

It didn't take long for someone to swoop in and grab the old account Wednesday afternoon. But about an hour later, it appeared that Twitter had suspended it again.