Atlanta (CNN) -- A pile of red, white and blue blankets on the cold, linoleum floor.

This is how Kecia Cruz's 20-year old son had been sleeping since returning to live with his mother nearly two weeks ago. A family with a past -- Cruz has served time in prison and her son is a recovering methadone addict.

Cruz sees her child's return as a second chance. She didn't want him sleeping on the floor, but she didn't know where to turn.

Sitting on Cruz's back porch recently, her neighbor had an answer: Beremedy.

Beremedy is an organization that utilizes social media such as Twitter, Facebook and blogs to streamline the donation of food, clothing and furniture to people in need. The name is a short way to say "you be the remedy for someone in need." 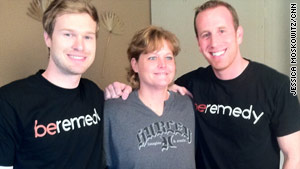 The neighbor, who previously received clothing for her six children, reached out to Beremedy on behalf of her friend.

"We were just sitting out back and I was explaining about my son coming home, and I don't remember how the conversation come about no bed but she said, 'I know somebody that might be able to help you,' " Cruz recalls.

Blake Canterbury is a charming 26-year-old with a background in new media marketing. He founded Beremedy in 2009, after flooding washed over parts of Atlanta, in order to get items such as baby formula and diapers to people in need.

"Everyone I've ever met in my entire life wanted to help other people; they just didn't know where to start," Canterbury says. "We thought, 'What would this city look like with 10,000 people getting a text message at the same time of needs in their community? Surely people would want to help with that."

The process is simple: Canterbury receives needs from nonprofits, school social workers and individuals looking for help directly on Beremedy.org.

Canterbury and a team of four volunteers use Google Wave to communicate about what needs they will accept or deny. Once a need is determined, a member of the team is assigned as case manager and writes a blurb about the story. Canterbury blasts out the write-up on Twitter and Facebook with a link back to the full story on Beremedy's site.

The person's last name is omitted to protect confidentiality; the donor and the recipient will never meet. 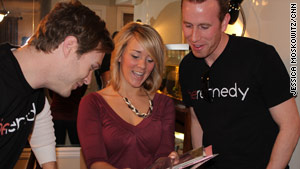 Hairstylist Ragan Holt responded with a mattress and box set for Cruz within 15 minutes of Canterbury's post.

So when Canterbury and fellow Beremedy volunteer Brian Sudduth, arrived with Cruz's new mattress on Saturday, March 12, mom had tears in her eyes.

"I don't know anything about a computer, I don't know how to text or anything like that, so, you know, I'm amazed at technology and just you know ... somebody helped me that didn't even know me. I had a need and it was met, and it's people who care."