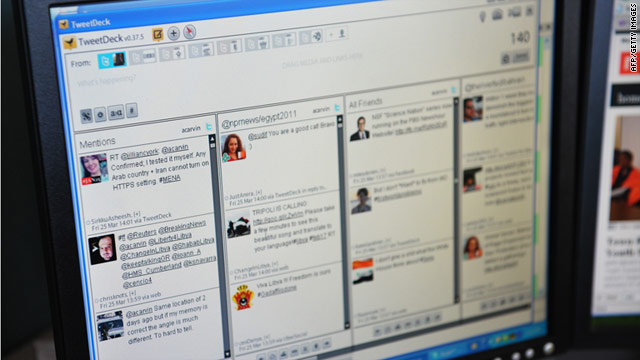 UberMedia is in talks to acquire TweetDeck, one of the most popular apps for connecting to Twitter, a source said.
STORY HIGHLIGHTS

(CNN) -- UberMedia, which owns several popular applications that interface with Twitter, is outlining plans to build a social network that could compete with that popular microblogging platform, said three people who were briefed on the plans.

The service would seek to attract users by addressing common complaints about Twitter, such as its restriction on the length of a message and how it can be confusing to newcomers, according to these sources, who were not authorized to speak publicly about the plans.

UberMedia is a leading developer of apps and Web-based services that help users communicate on Twitter and other social media platforms. The Pasadena, California-based company has amassed a small empire of apps -- among them UberSocial, Echofon and Twidroyd -- that connect to Twitter and offer features beyond Twitter's own software.

Together, those UberMedia programs accounted for about 11.5% of tweets sent on one day last month, according to a study by market research firm Sysomos. UberSocial is the third most-popular way to send tweets, behind Twitter's website and official iPhone app, the study found.

Twitter up to 1 billion tweets a week
RELATED TOPICS

TweetDeck is tied with Twitter's own BlackBerry app as the fourth most-popular software for sending messages, Sysomos said. UberMedia is in talks to acquire TweetDeck, but that deal hasn't been finalized, according to a person familiar with the matter. Industry website TechCrunch first reported on the talks.

"The audience for TweetDeck is very different" from the people who use Twitter's official apps, Tony Haile, a general manager for Betaworks, said a year ago. The technology incubator is where TweetDeck started. "We never competed on core functionality."

Twitter has experienced rapid growth since its launch five years ago and now has about 200 million registered users. Last week, Twitter said users were sending 155 million tweets a day, a 282% increase over a year ago. Sign-ups over the most recent quarter were up 52% compared with the year before, Twitter said.

Twitter competitors such as FriendFeed or Google Buzz have failed to catch on with mainstream users -- although some, like Tumblr, are growing.

That memo caused a bit of an uproar among developers, who were unhappy that Twitter was discouraging them from developing standard client apps. Twitter has instead asked independent programmers to build software that presents Twitter data in unique ways, such as mashups, rather than showing a conventional list of messages from followers.

Developers took to blogs and message boards to vent, accusing Twitter of abandoning the unpaid evangelists who helped grow the service early on.

Twitter held a conference around this time last year called Chirp, aimed at developers, where it launched the first official apps for smartphones. Mobile was previously a niche reserved for third-party developers, and they were put off by Twitter seemingly encroaching on their territory. Twitter has not said whether it will hold a Chirp event this year.

The relationship between Twitter and UberMedia appears to be especially strained.

Twitter temporarily shut out three of UberMedia's apps in February, saying they were in violation of company policies. Twitter asked UberMedia to change the name of one of the apps, formerly called UberTwitter and now UberSocial, said UberMedia CEO Bill Gross.

UberMedia's proposed Twitter competitor could be a backup plan, implemented only if the relationship with Twitter becomes untenable, said a person familiar with the matter. Gross, who sources say has been briefing people on the project for months, declined requests for interviews through a spokesman.

"Our foremost desire is to continue to innovate on the Twitter platform and bring more users and usage to Twitter," UberMedia marketing chief Steve Chadima said in a statement.

A competing short-messaging channel from UberMedia could succeed where others, like Jaiku, have struggled. Because UberMedia's apps reach a significant portion of Twitter's audience, many of whom are power users, the new service could sway some influential people.

TweetDeck asks users to sign up for an account separate from their Twitter handle in order to synchronize their windows between mobile and desktop platforms. With an account, they can also post to a service called Deck.ly, which allows messages longer than Twitter's 140-character limit.

Adopting other platforms, such as Facebook and homegrown networks, is a sensible strategy, said Jeremiah Owyang, an industry analyst for research firm Altimeter Group. Twitter may risk losing support from developers unless it finds a way to properly articulate its strategy and the reasons for changes to policy, he said.

Developers "can't rely on one social network," Owyang said. "They need to not put all their eggs in one basket. Being on Twitter alone is not going to work."