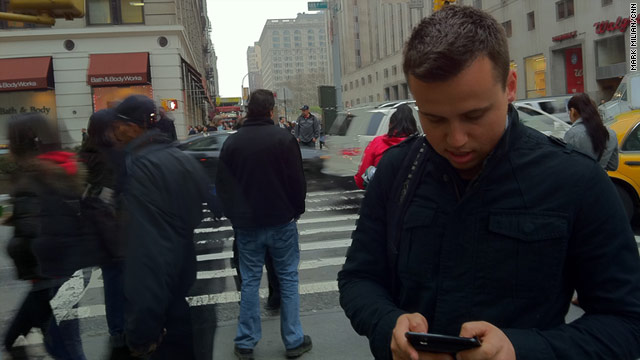 The social media giant is hiring someone to build relationships with reporters and news organizations. The new hire also will help organize journalism-focused events, the first of which will take place this month at Facebook's headquarters in Palo Alto, California.

Vadim Lavrusik will start as journalist program manager for Facebook, based in New York, April 25. He leaves Mashable, the tech-news site where he was a community manager. (Mashable is a CNN.com content partner.)

In his new job, Lavrusik will be responsible for advocating for the use of Facebook as a reporting and promotional tool. He will also maintain the recently launched Journalists on Facebook page.

With more than half a billion users, Facebook is nearly ubiquitous as a way for keeping in touch with friends and family. However, the site has lagged behind competitors like Twitter and Tumblr in widespread adoption by reporters as a productivity or newsgathering tool.

"A lot of journalists don't have a professional presence on Facebook yet," Lavrusik said. "They think it's another thing they have to add to their workloads. ... It can actually make your job easier."

Lavrusik, a Belarus native, caught the eye of Facebook executives with his blog posts about the practical applications for using the giant social network in reporting. For example, he urges the use of Facebook as a sort of new-age White Pages, helping reporters get in contact with sources.

Before Mashable, Lavrusik interned at the New York Times as a social media producer. He also teaches a graduate-school journalism class about social media at Columbia University.

"The goal is to build programs that bridge the gap between journalists and Facebook," Lavrusik said. "Twitter is very public. It's an informational platform. It's easy to see the application for news."

Lavrusik will help educate about and carry out Facebook's new newsy mission, which some people close to the company say is a case of Twitter envy. (Last fall, Facebook's offer of $2 billion to acquire Twitter was spurned, according to a Fortune report.) Journalists very quickly took to Twitter and, in doing so, helped promote it to their readers and viewers.

"I feel lucky that we just have such a lead and such an advantage of being part of newsrooms already," said Robin Sloan, a member of Twitter's three-person media-partnerships team. "It's a luxury. We get to go into newsrooms, and, literally, on every other monitor, people are running TweetDeck or logged into Twitter.com."

Facebook also has a group specializing in media partnerships, which Lavrusik will be working closely with, a company spokeswoman said. But that group mainly focuses on business-development initiatives, Lavrusik said. Those programs help news organizations implement tools such as the Like button and the new Facebook-powered commenting system, which are designed to help create more links between news sites and Facebook's network.

Twitter's media-partnership team helps teach and field questions from reporters about how to use its service in their work, said Sloan, who joined Twitter from Current TV last year. That's on top of all the partnerships that the group cultivates with news-agency marketers, award-show promoters, sports and entertainment networks and others that fall under the all-encompassing "media" umbrella.

"Even before there was anybody working on media partnerships at Twitter, journalists were just using it like crazy," Sloan said. "The kind of work that journalists and news organizations do on Twitter is really the work that they've always done and are good at."

Sloan doesn't believe that Facebook's growing focus on the news industry is at odds with his team's efforts. Reporters, he said, "need all the tools that they can get. So we're just trying to make Twitter as useful and powerful as we can and fill in that part of the puzzle."

Mark Coatney, Tumblr's media evangelist and a former journalist, concurs, saying that each is used differently. Neither Facebook nor Twitter "is really designed to be a content delivery platform" but is instead used to link to or find articles, he said. "From a branding perspective, a page on Facebook will always look like Facebook."

During Coatney's short tenure, Tumblr has achieved a sort of Facebook or Twitter status with reporters; his job mostly entails brainstorming ideas for how Tumblr can be employed uniquely. His journalism outreach may have even spurred reporters to write about Tumblr more often.

"The story ideas have moved from, 'Hey, what is this thing?' to, 'Here's some cool things that are being done on Tumblr,' " Coatney said.

Encouraging cultural influencers such as journalists to use social networks provides value to these companies and also to the reporters who get a new arsenal of tools, said Dan Gillmor, a digital-media professor and director for the Knight Center at Arizona State University.

"I don't know if it will cause people to write about them more, but it's obviously a smart thing for these companies to be evangelizing journalists," Gillmor said. "The more people who use these platforms for their work, the better it is for the platforms."